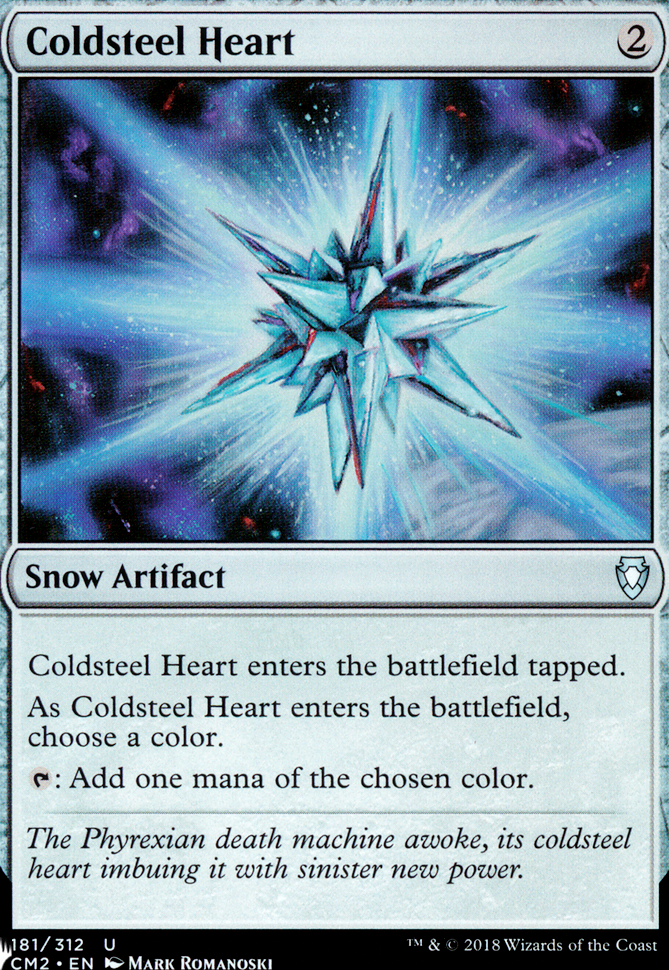 As Coldsteel Heart enters the battlefield, choose a colour.

Coldsteel Heart occurrence in decks from the last year

Teysa Combo with Superfriends
by Guerric

Nice list, but really need more mana base, unless your playgroup has the similar built deck...
I would go for 37 lands; cards like Oreskos Explorer;Gift of Estates;Knight of the White Orchid;Burnished Hart;Solemn Simulacrum; Land Tax/Endless Horizons to fetch some lands and thin your deck.
Marble Diamond/Coldsteel Heart;Mind Stone - more mana rocks.

Court Hussar seems weak. Syr Faren, the Hengehammer and Knight of the Reliquary do as well. I would cut all of them for better ramp cards, like Arcane Signet, Fellwar Stone, Coldsteel Heart. Ancient Ziggurat might replace a Transguild Promenade. Order of Midnight also seems weak. Try Belle of the Brawl. Basri's Lieutenant is also really good. It could replace Deathless Knight.

if you play Mystic Retrieval you dont need the eldrazi to shuffle your graveyard in your library:

draw your deck with your combo

cast Mystic Retrieval on your echo

repeat until everyone is dead

I'd cut Charcoal Diamond and Coldsteel Heart for Arcane Signet and Fellwar Stone having your rocks enter untapped is really helpful.