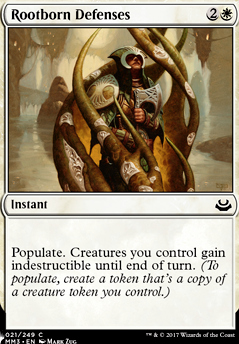 Populate. Creatures you control are indestructible this turn. (To populate, create a token that's a copy of a creature token you control.)

Rootborn Defenses occurrence in decks from the last year

EdhOutlaws sadly I havent been able to play my Rhys deck since making some changes. I did the following:

In: Linvala, Keeper of Silence OUt: Llanowar Elves

In: Illusionist's Bracers Out: Primal Vigor

In: Wrath of God Out: Glare of Subdual

That's a sweet deck! Are you sure you're new to the game?!?

How would you feel about effects like Lightmine Field or Caltrops?

Are there any parts of the deck you're looking for suggestions with?

I wouldn't put Regrowth in this list, but put some cars that get you tokens like Raise the Alarm.

Also, how about replacing Parallel Lives by Divine Visitation? You could fill the battlefield with angels with March of the Multitudes.

Rootborn Defenses would be also a good option to gain time and protect your tokens.

Thunderfoot Baloth and Pathbreaker Ibex are my two win swings for sure. I agree about Craterhoof Behemoth I bought mine few years ago without really knowing how much he will climb in price. Have you seen the two new commander cards that are amazing for our decks?? Flawless Maneuver and Deflecting Swat. Rootborn Defenses has come in clutch for me as well if you donât have the more experience Heroic Intervention

Presence of Gond may be good to tap your commander and have it make 2 tokens instead of the one.

Beastmaster Ascension will quickly build up counters with all the tokens you have so they will all quickly start to hit like trucks.

To protect from board wipes Make a Stand , Unbreakable Formation , Rootborn Defenses , and Dauntless Escort will all save you from most board wipes.

There is also Heroic Intervention but Iâm mostly trying to recommend cards that arenât so pricy.