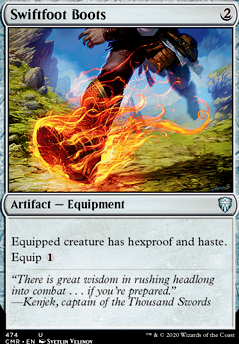 Equipped creature has hexproof and haste.

Swiftfoot Boots occurrence in decks from the last year

A Tyrant's playground
by tragicatb 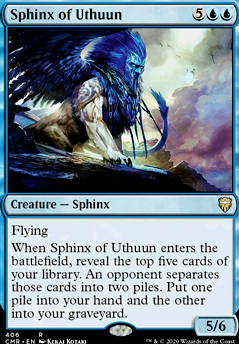 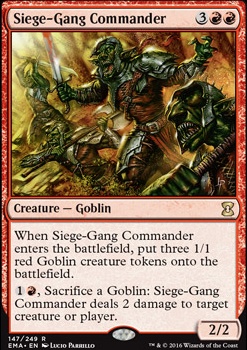 Do note that Lightning Greaves is kinda awkward in this combo, Shroud prevents your Jegantha from being targeted by your Retreiver to untap it. Swiftfoot Boots will do the trick, but the Greaves need to be shuffled around all the time to be able to untap.

I agree The Great Henge would be perfect for this deck so I recommend it.

Consider cards such as Lightning Greaves or Swiftfoot Boots would be great for this deck as they can give you haste and protect your creatures.

Increasing Savagery is an amazing card for green decks that focus on +1+1 counters. Really do add more trample into your deck so that you always get the +1+1 counters.

Anyway good luck. Your deck has a lot of great stuff going for it.

I just realized you left that great comment on my Archelos list and I didn't look at your deck yet. I've done it now. This is awesome, I took some more inspiration from here. I really like Groundskeeper, I might add it if I manage to find a slot.

There are two cards I think you might like: Trench Behemoth and Meloku the Clouded Mirror are possible finishers that enable additional land drops once you've out of lands to play.

A card I don't understand here is Ring of Evos Isle. Is it there for giving Yarok hexproof? If so, I think Lightning Greaves and/or Swiftfoot Boots would do a better job at that. I don't think the +1/+1 on Yarok is worth it.

This rocks I've always been a fan of arcades, it a fun commander, iv considered building a deck with him many times, one thing to consider tho is that his play style revolves around building up walls then bringing him out to swing with said walls, so this means everyone that starts seing you cast 7/7's for effectively 3 mana or so are going to start targeting your commander first so adding in some extra protection for him is key, some cards to consider are staples like Swiftfoot Boots, or Lightning Greaves, your in white and green so Shalai, Voice of Plenty is a great option or if your not concerned about mana costs Avacyn, Angel of Hope is also great, another thing to consider is that your in blue as well so some countermagic could come in handy like classic Counterspell, or something a little more broad like Counterbalance, just some food for thought :), good luck