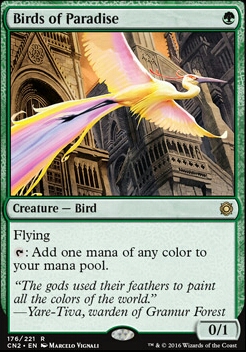 Birds of Paradise occurrence in decks from the last year

Something I can always recommend is ramp. Its fun smashing face with Dinos (10/10 would recommend), but you need to cast them or your commander first and its good to do it faster to get more value.

Naya colors have some good sources of ramp- for cheap we've got Llanowar Elves, Fyndhorn Elves (just got reprinted at common in Commander Legends!), Elvish Mystic, Commander's Sphere Avacyn's Pilgrim, Zhur-Taa Druid,Sakura-Tribe Elder, Talisman of Impulse, and Talisman of Conviction (this one varies in price a bit- most places I visit have cheap copies). Not as cheap there's Incubation Druid, Birds of Paradise, Sol Ring, Talisman of Unity, and Arcane Signet. More expensive there's also Smothering Tithe and Dockside Extortionist.

Rubblebelt Raiders and Beastmaster Ascension for the synergy. Birds of Paradise, Llanowar Elves, and Elvish Mystic to help with your mana curve. Xenagos, the Reveler for both! Xenagos is a tricky commander because it needs a lot of resources to use properly, but this is a solid list for your first EDH build! Keep it up! :D

I would probably add some dorks especially Birds of Paradise to help with early acceleration and fixing, maybe add some signets or talismans too. Also, I would add some more big draw spells like Pull from Tomorrow to keep you at a full hand.

The new Demon's Disciple is better than Fleshbag Marauder I personally prefer Heart Warden or Llanowar Visionary over Birds of Paradise, since the interact with Meren more effectively and can do something the turn they are played.

I also personally think Phyrexian Arena and other slow draw cards (such as Underworld Connections or Dread Presence ) are unreliable. I consider them to be inferior to Ancient Craving Sign in Blood or Ambition's Cost, but there is a case for playing arena, so make whatever preference or meta call you like, I just think definitely getting 3 cards right away is better than hoping to net 3 cards over 3 turns.

Interesting build, some unusual Meren choices, but some clever interactions too. I like how many different Meren shells there are, she is a very versatile commander.