At the beginning of your precombat main phase, remove all charge counters from Coalition Relic. Add one mana of any color to your mana pool for each counter removed this way.

Overlord of the Slivers
by Steam_mage86 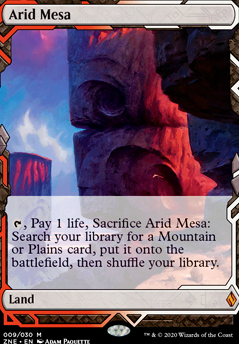 A combination of 2-drop and 4-drop rocks can get Thrax out as early as turn 4: turn two play the 2-drop rock, which lets you play a 4-drop rock on turn 3, leading to 7 mana on turn 4 assuming you have 4 lands (odds are good).

Glad I could help. I do enjoy the concept, it's not something I've seen before. looking a bit closer, you're not doing too bad at digging into your deck tbh, and you seem to want to be throwing stuff into the graveyard. I know personally how hard ramp is in blue or white but for ramp you may try Talisman of Progress Star Compass Coalition Relic Heraldic Banner or less budget Phyrexian Altar Extraplanar Lens or Gauntlet of Power. Also you could look at Embalmer's Tools that goes with your strategy. You could also look into Mimic Vat which could prove useful. As far as cuts goes, I know you're on that populate train but some of them are not really that great. If you don't have the token in play or your tokens get blown up you'll be in a bad spot.

I do want to say that my suggestions are not criticisms, I like this deck and I'm not trying to bring you down at all on it. Just trying to help give you some ideas that might help get you to the next level

So I agree on several points:

Hey there! I'm usually the land and ramp helping guy, and you wrote that is one of your issues, so here, I hope I'll be able to clear that up a little bit. Let's start off with lands.

I see shock lands, fetch lands, and of course horizon lands, along with a few stand alone multicolor lands. Not bad! Keep ALL the shocks, and keep ALL the fetches. Fetches can search for shocks and shocks are really good. Usually I like to recommend filter lands (like Mystic Gate) or fast lands (such as Seachrome Coast). Horizon lands are also some of my all time favorites, but playing four of magics colors can be quite tough. For three, four, and definitely five colors, I usually recommend more multicolor lands. Your average CMC is also quite high, so maybe 1-2 more lands would be pretty good if you think you can. That said, consider some of the following lands.

So basically, consider much more things that can add a color of your choice, they give you much more options! The other lands are very good too, so you have to decide which one would be more beneficial in your opinion, though to me, I would cut Horizons and triomes for the ones I mentioned.

That said, let's move on to some ramp! Arcane Signet, Chromatic Lantern, and Sol Ring are pretty good, but I might have some you find better. Green is amazing for ramp, so by adding amazing green ramp spells, not only are you now getting the best ramp options, but also you are evening out the color pi for your deck! Consider some of the following