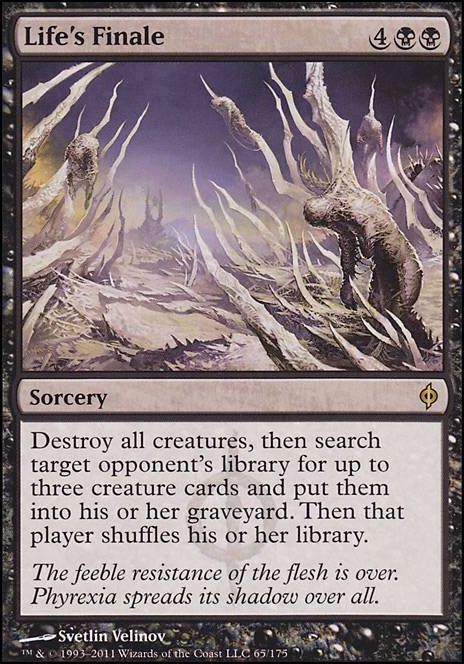 Destroy all creatures, then search target opponent's library for up to three creature cards and put them into his or her graveyard. Then that player shuffles his or her library.

My arms are longer than yours.
by Awoken_Leviathan

Profane Command - gives X of your creatures Fear to kill your opponents easier with infect damage.

Mimic Vat - Ability to create token of any of your creatures with infect every turn? Seems pretty decent to me :D And it also counts ANY creature that dies. In my opinion, this is one of many card that can theoretically fit in any deck. It also works pretty great with Rings of Brighthearth and Strionic Resonator, but its for another deck I guess. Bonus point: the new art of Mimic Vat from Theros Beyond Death has really nice art (even the older one has).

Emergence Zone - fairly nice utiliy colorless deck. Again, in my opinion it can be used in many, many decks. :D

Homeward Path - You probably dont want to get your infect creatures stolen and hit your own face... :D

Lake of the Dead/Nykthos, Shrine to Nyx - very pricey lands, but they can help a lot in mono black deck. Myriad Landscape is also fairly nice in mono color decks.

Haunted Crossroads/Mortuary/Tortured Existence - I use those cards in my Syr Konrad, the Grim deck, which work just great. But they might be fairly good in any other deck, just to get your creature back and draw it right away (which can be really easy in black). You could also abuse Haunted Crossroads/Mortuary with Bolas's Citadel, but I dont feel like it fits here (even how powerful that card is).

After all, playing full infect deck might be dangerous, depending on your playgroup, ofc. I personally play Tainted Strike in my For the Void deck. Its great card for Syr Konrad, together with any boardwipe OR Tortured Existence, Desecrated Tomb and Phyrexian Altar.

Life's Finale and Nezumi Graverobber seem fun, I'll have to see if I can fit them in! Thanks casual_competitive!

oh somone already said that, fuck. gimmy a second to find another card... uhhh idk Boneyard Parley sounds pretty synergistic to your commander, thats alota mana tho. Deadeye Tracker and Nezumi Graverobber could be epic, exile the creatures you dont care for so u have a better chance of getting a better creature. Life's Finale boardwipes and lets you get the biggest of boys from target opponents library.