Search your library for up to two basic land cards, reveal those cards, and put one onto the battlefield tapped and the other into your hand. Then shuffle your library.

Kodama's Reach occurrence in decks from the last year 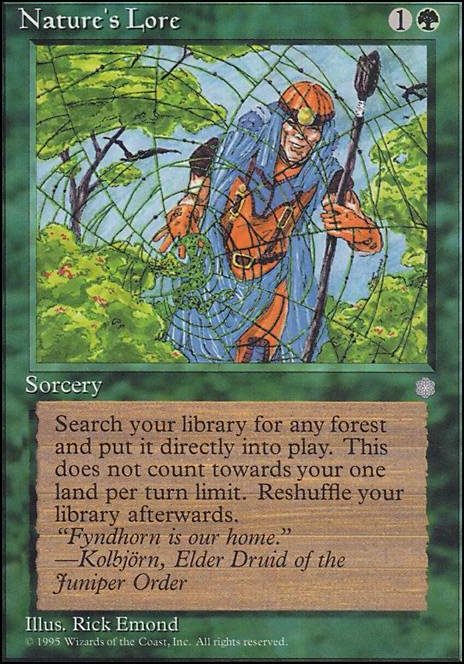 A Tail of Two Love Stories
by Azielle

First off I want to say I like a lot of the choices you made for the deck! In five color decks it can be hard to get the mana you need. Cards like Nature's Lore, Rampant Growth, Kodama's Reach, and Cultivate may help you. I see that you are running fetch lands like Wooded Foothills , in which case try looking into the "triomes" from the recent Ikoria set as you can get them from the fetch lands. My best piece of advice would be to run more lands and less basic lands in general, if you can afford to. Many of your cards have high mana requirements even with the Ur-Dragon's ability. I think going to 37 or 38 lands would help you. I think in your deck you have too many basic lands which can make it hard to cast your green ramp cards. However, I do recommend having at least one of each basic land. I hope this helps you!

I'm working on something similar but with The Ur Dragon still in the C-zone.

Mana base is tough in 5 color decks. The good news is you already have some great stuff. First, definitely add a Fellwar Stone. It's often as good as Arcane Signet and is a fitting companion

Then I'd try to replace your vivid lands + Rogue's passage (most of your creatures have built in evasion with flying anyway) with the new Triomes.

With triomes + the existing shocks you have, your fixing options really open up when you encounter your existing Farseek, plus you can add in a Nature's Lore.

I'd swap Armillary Sphere for Wayfarer's Bauble. One should have come with the precon. The sphere only fixes you while the Bauble ramps and fixes. Additionally you can crack the Bauble as early as turn 2 while it takes till till at least turn 3 to crack the Sphere. Kodama's Reach is also I think just objectively better than the Armillary Sphere as it also fixes and ramps on turn 3.

Now let's move onto your rocks. There are two easy upgrades I think you can make here.

Commander's Sphere is good and Darksteel Ingot is at least above average but I think you can easily upgrade these to Chromatic Lantern and Dragon's Hoard. This type of deck is where Chromatic Lantern is at it's most useful, so if you have one somewhere else I'd definitely move it. Dragon's Hoard speaks for itself. I think its card draw is worth a lot more than the marginal value of having an indestructible rock. Worn Powerstone is a bit suspect here as well, since you're running 5 colors, but I can see how it'd be valuable in ramping out your commander sooner rather than later. I still might swap it for a Kodama's Reach since it ramps and fixes you at a fair rate, and you aren't running it.

Finally. - 34 lands is really light for how big your spells are. Brainstorm is just really bad in EDH without the proper support to manipulate the top deck. I'd rather play an extra land or two over that and say, Mana Leak. I can totally get behind running a counterspell but you're not a control deck so multiples aren't really needed. You could probably drop the worse of the two you have.

Anyway, Hope that helps. Apologies if it was too long. :P

edengstrom1 looks good! Karametra is one of my favorite commanders and is really underrated imo. I would recommend more cheap ramp like Rampant Growth and Farseek or even Cultivate and Kodama's Reach. Signets and cheap artifact ramp work well too. Anything to ensure you play Karametra before turn 5. One of my favorite ramp cards I think is underplayed is Wall of Roots. Since you can play some huge creatures in this deck id recommend some draw spells like Rishkar's Expertise and Garruk, Primal Hunter. Another card I think is really cool and would be a monster in this deck is Emeria Shepherd You can get SO much value off of this cards its insane. I have a version of Karametra on my page if you wanna check it out. Other than that looks good man +1 from me