Creatures you control have vigilance.

Brave the Sands occurrence in decks from the last year

Feather, the Redeemed
by BenGLeprechaun 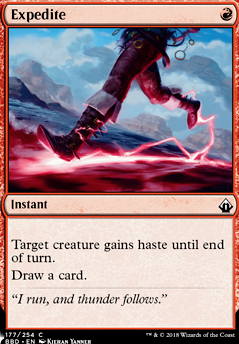 multimedia A large reason for Brave the Sands and True Conviction is the fact that many of my creatures (including my commander) have abilities that trigger with combat damage, so double strike would allow for them to trigger and vigilance allows me to get those triggers off without being susceptible to attacks. Do you think that I should keep those in or just remove them like you suggested?

Brave the Sands is a great card, but it is useless without a creature on the battlefield, so I have made a creature with the same effect as that card, as seen, here:

Each creature you control has vigilance and may block an additional creature each combat.

For a mere one mana over BtS, this card is a 2/2 creature, which means that it receives its own benefits.

I'd probably cut Echoes of the Kin Tree, and Brave the Sands