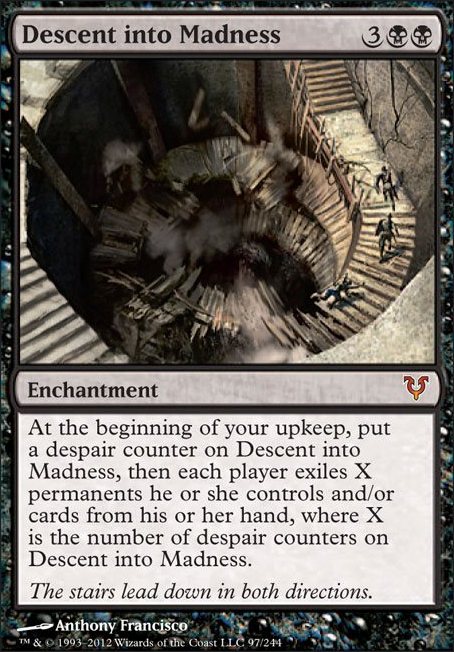 A Thorn Defends the Rose...
by DarkStarStorm

Death and STaxes
by stumpwater2003

DarkHero on Suggestions for Sire/Descent Demons

Just looking for some opinions to finalize this bad boy. I've fallen bellow 100 cards, could probably justify cutting others, and I'm not married to the commander.

So the main strategy will be to do a sort of soft lock with Sire Of Insanity/Descent into Madness effects that empty hands, and then use Theater of Horrors/Sunbird's Invocation/Stolen Strategy/Sin Prodder ect. to get around the effect.

Alternatively, big Demons from big mana, Havoc Festival with effects like Archfiend of Despair, and something along the lines of Bloodchief Ascension/Pain Magnification/Shrieking Affliction

Descent into Madness could be interesting. Yawg can proliferate the despair counters to make it faster, and you'll (hopefully) have tokens out that you can exile to mitigate how much it hurts you. It's a weird card, but this might be the deck for it.

I think Descent into Madness perfectly captures the stair scene

Flooremoji on CHALLENGE MY DECK-BUILDING SKILL

Build a deck around:

If Descent into Madness stays out long enough, the game will eventually reset, albeit with top-decking. But if the game does end up restarting, what better way than with Karn Liberated 's ultimate?

You may also want to ramp your way towards devastation. Dark Ritual and Cabal Coffers are a couple cards that could help pay for costly spells or just a turn one Arterial Flow .

The concept of the deck sounds great, I'm tempted to make a deck with the same concept, or just "netdeck" the one you make. Havoc Festival looks good, and it plays along with the idea of not winning, but making your opponent lose because they cannot gain life . But enchantments can get destroyed easily due to things like Naturalize , Dawn to Dusk , Demystify , Decimate , etc. So just so that you have something to also prevent lifegain I would add Erebos, God of the Dead , That is if you're not on a budget. Descent into Madness is also a good card for the concept . I don't really know what cards you're going to use in the deck so it's kind of hard to determine what cards to suggest. I would add Exquisite Blood and Sanguine Bond to lower your opponents health and gain some yourself, but if you're going to add those then you should probably add some lifegain stuff to this deck, such as Disciple of Bolas , Blood Artist , Sorin's Vengeance , Chalice of Life  Flip , painful quandry , etc. I also don't know if you're going to be playing casual or competitive, but i'll assume competitive. I'd also add Kaervek the Merciless . Maybe you could throw in Whip of Erebos and a Exsanguinate . Those are all the suggestions I have right now, so uh good luck on making the deck. Again, the concept is really interesting to me so I hope this deck works out for you.

Could be a bit stax-y for your fun requirement but it's not exactly easy to pull off and Descent is super flavourful.