Whenever an opponent casts a creature or planeswalker spell with the same name as a card in their graveyard, that player loses 10 life. 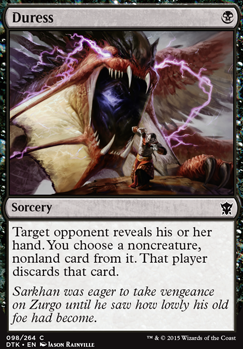 Kolaghan and the Rakdos Train
by Draakeragon

Have you thought about the card Dragon storm you could play it in the deck and add more rituals along with a a Dragonlord Kolaghan and just win when you cast dragon storm.

Really Cool and Unique Build! This reminds me of My Golos Dragon Stompy deck, which, like this list, deviates from the normal combo-heavy golos builds. One issue I think you might have with this build is exiling multiple gates with golos and being unable to cast them. Another issue is the lack of haste enablers and combat-focused in the Eldrazi archetype compared to dragons. Dragons have cards like Karrthus, Tyrant of Jund, Dragonlord Kolaghan, Sylvia Brightspear, and Atarka, World Render, all of which help your dragons get in for a ton of damage very quickly, before your opponents can cast removal spells and/or sweepers. Despite these issues though, I really love the list and look forward to seeing how you upgrade it. Some good additions include: Worldly Tutor, Mystical Tutor, Lurking Predators and the Fist of Suns / Jodah, Archmage Eternal + Morophon, the Boundless combo.

Did You Say Commander?

Don't bother with all of those Jaces and the Oracle. Use Dragonlord Kolaghan as your main win con. One or two oracle is fine though. Also for your ramp, I'd use Sylvan Caryatid or a similar card over the spells. Finally, a really good clone effect you're missing is Altered Ego. Oh yeah, and for your sideboard, make sure they're all even CMC so that you can still cast Gyruda after SB.

Ideally you want to find Spark Double, and make it a non-legendary copy of Gyruda

Then you use all your clones to copy the non-legendary version and amass a huge army.

In these colours I see no haste option for a huge swing. Other versions run Dragonlord Kolaghan

The other path to victory is to mill your opponent, although that relies on you not also milling yourself.