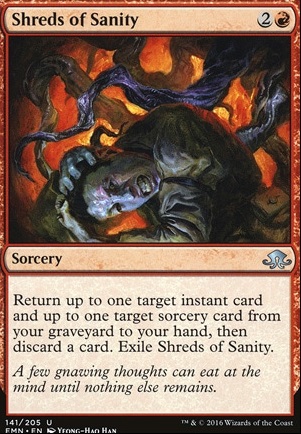 Shreds of Sanity occurrence in decks from the last year

Treasure your Dead
by FaykeOut 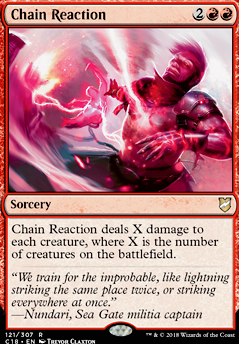 Suns_Champion - Thank you! Yes, Underworld Breach is going in as soon as I get a spare copy, probably instead of Shreds of Sanity. Endless Atlas and Quest for Pure Flame have been in the list before, but they are on the shortlist of cards that I'm considering putting back in, if I can work out what to take out. Maybe I need to keep a quasi-sideboard with the deck and switch it up between games.

Ignite the Future is a lot better than I thought when I first read it, as it has the Commune with Lava wording - end of your next turn. The flashback free cast is handy too - doesn't work with X cost spells, but from that 'may' wording I think you could still choose to pay X costs as normal (if you had any mana left after paying the flashback cost, of course). Definitely worth considering, although I'm not sure what to replace.

Other probable Ikoria/Commander 2020 updates - Twinning Staff, Deflecting Swat and maybe Shiny Impetus? Surly Badgersaur has some good discard synergy, but I don't want to add any more creatures if I can help it.

lagotripha that's an interesting take on the deck, but at that point it feels too close to the common Sylvan Awakening Jeskai Ascendancy combo deck, which is not what I'm trying to do.

The problem with planeswalkers such as the ones you mentioned is that I can only use their abilities once on the combo turn, and the closest one to being playable would be Kiora, Behemoth Beckoner because of its low CMC.

Growth Spiral is an interesting two-drop. The main reason that I didn't include it is that I don't think I would have 4 lands by turn 3 unless I use a tutor effect on the previous turn. My two-drops are already overloaded with Wishclaw Talisman , Shimmer of Possibility , and Sylvan Scrying , so I would probably chop a couple of those off to make room for Growth Spiral .

Shreds of Sanity had me for a second there, but then I saw that the only instants I play are Opt and Tale's End . Recurring Opt isn't much, and recurring Tale's End does absolutely nothing. Instead, I have been testing Mission Briefing which is like Shreds but surveils and costs one less mana.

Underworld Connections might not be a bad idea, but the problem is that my primary untap spells untap two lands, and I'm comboing with two Lotus Field s. I don't know if I would enchant a Lotus Field just to draw a card and maybe have that small chance of drawing an untap spell, or enchant a random extra land to untap with Finale when that happens, and in that case I would only draw 1 extra card for 1 life and technically 1 mana which is what Finale does anyway. Although not a bad idea, but I don't really think it's necessary for what the combo needs.

Zacama, Primal Calamity is cute, but the problem is that Lotus Field taps for one color, and Zacama requires three. Although not impossible, I would rather produce blue mana first to use untap spells then I would be left with tapping two Fields for two different It would be nice to test out some extra turn spells in the deck. Although I can't use Karn's Temporal Sundering because it's a "legendary sorcery" and I have no legendary things in the deck, I would probably resort to Nexus of Fate due to its repeatable use. Thanks for the input!

Kiora, Behemoth Beckoner feels like it might have an alternative place in a list which runs some kind of creatures (likely Zacama, Primal Calamity ). Nissa, Vital Force , Kiora, Master of the Depths , Ral Zarek and Nissa, Who Shakes the World face similar headaches.

Unwind targeting your own opt or similar is a cute option. Underworld Connections lets you stabilize draws off of land untapping.

Some taking turns pieces are interesting - Karn's Temporal Sundering lets you answer a Deafening Silence then go off. Shreds of Sanity is interesting recursion. Growth Spiral is instant speed ramp, which is nice when you are holding up countermagic.

There is an alternative path where you look to animate the land then untap creatures you control, but I'm not sure there are enough To Arms! effects in pioneer to make the vulnerability to creature disruption worth it.

once more with feeling

Nice deck! though, were you going for simple? because that could change some of my suggestions...

Gonna take a break for now though. Let me know your thoughts and I'll continue looking at this later

Counterspell instead of Cancel

remember, some things HAVE to go

Delirium -- if we're going for simple, this card misses the mark.

Red Elemental Blast -- cheap, and most often it is a blue spell that is the target. But this takes a counterspell slot and is pretty restricted.