When Goblin Recruiter enters the battlefield, search your library for any number of Goblin cards and reveal them. Shuffle your library, then put those cards on top of it in any order.

Goblin Recruiter occurrence in decks from the last year 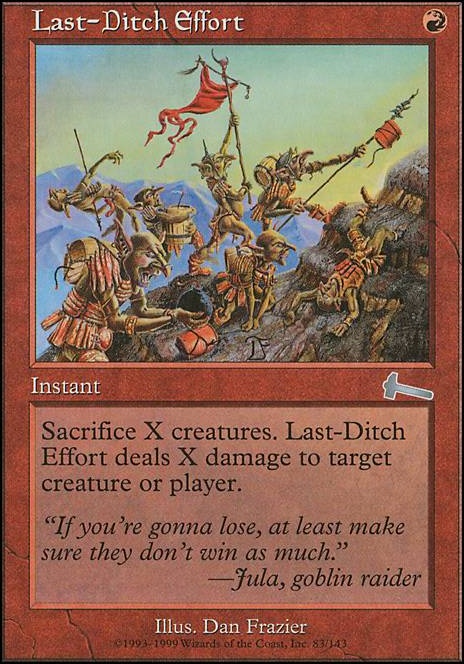 Goblin Recruiter is another great Goblin-search card since you can use him to snag any # of Goblins. He's a bit more on the expensive side for a Single, but he'd be an awesome fit here. Moggcatcher is another good one, but again on the slightly expensive side since he was never reprinted. His ability tosses Goblins right from the Library to Play though, so depending on your normal Win Conditions for the deck he might actually do better for you (especially with some of those 4 and 5-mana Goblins in there)

Epicurus on Should Tutors Have Additional Effects?

I don't think they should have additional effects. Mostly, they're utilized in EDH for setting up infinite combos. As such, they're powerful enough as it is, since most infinite combos are 2-card combos in a 99 card deck. And while the idea of an EDH deck with a 2-card combo and a slew of tutors seems incredibly boring and uncreative to me, and thus I don't use them, I know that the top competitive decks do, and giving those decks an additional benefit from the tutors is incredibly unfair to those of us who play for fun.

I have Demonic Tutor in my casual, semi-modern cascade deck, only because there are so many one-ofs in that deck. And Fetch Lands are a staple in my EDH decks, because I like to be able to thin out the lands during the course of the game, lessening the chances of drawing lands late-game. And I have both Goblin Matron and Goblin Recruiter in my Fling Squee deck. And spells like Entomb and Buried Alive are staples for reanimator, but don't do much good in any other build. And even then, the idea that I could gain an added bonus from a card that gets me exactly what I need earlier than I may have drawn it, sounds needlessly overpowered.

Card advantage is powerful enough. Raising the percentages is even more powerful. That Shhhh don't need to be more than it is.

Conspicuous Snoop and Fiery Emancipation both look amazing, and we got another Goblin spoiled today!

Goes very, very well with Goblin Recruiter, and as long as you make an unblockable attack with him he can swing for quite a lot.

Goblin Recruiter is going to get a bit more expensive

Hey ZombieCat, Conspicuous Snoop is definitly a card to keep an eye on. You basically create some sort of red Doomsday pile with cards like Kiki-Jiki, Mirror Breaker, Mogg Fanatic as a finisher. You can win on the spot with this combo: Haste enabled -> Goblin Recruiter -> Kiki-Jiki, Mirror Breaker on to the top, second card is Mogg Fanatic. From here on you create limitless Conspicuous Snoop, to end the loop and finish you create one more Goblin Recruiter to change the top of you deck to Mogg Fanatic and sac everything for the win.

It's even possible to just win with ETB's from the crazy amount of Conspicuous Snoop with thinks like Impact Tremors or Purphoros, God of the Forge. Even milling with Altar of Dementia works fine if damage is not an option.

I've been playing a variation of your list for about a year now and fell in love ever since. At first I was not convinced about snoop until realizing the combo!

Play the Goblin Recruiter, getting Dark-Dweller Oracle, Kiki-Jiki, Mirror Breaker, Skirk Prospector, Torch Courier or Goblin Chieftan, and Conspicuous Snoop. Put them on the top of your library, first card on the bottom of the pile and going up

Some cards we can cut to fit in the Fanatic Snoop Combo and Kiki Snoop combo are:

Cards to add for the combos:

Thank you very much for the suggestions! They are all very strong. A few of the changes, though, like adding in the Blood Pod lines, would make this deck play like a weaker version of my current Marath cEDH deck: https://tappedout.net/mtg-decks/01-10-19-wrath-of-marath/

Some suggestions I will definitely be making, though:

Changing out Reclamation Sage for Caustic Caterpillar is stellar.

I agree with your assessment of Wood Elves, and Glimpse of Nature would fit perfectly there.

Mycoloth I have waffled back and forth on, originally it was Siege-Gang Commander, but I think Oakhame Adversary (Grob) would be perfect in that spot.

As much as I love Krosan Grip and Beast Within, I feel one may have to go the same way that it did in Marath: cut for Nature's Claim.

As for Splinter Twin, it is great, but really hard to reliably tutor for without White. And Goblin Ringleader is in the list because of Goblin Recruiter. Recruiter is very easy to tutor for, and is a super-reliable source of cards. Any Goblin pile that Recruiter searches up is topped by Ringleader, who then draws the rest of the Goblins you put on top. It's the reason Recruiter is banned in Legacy, and provides that same gas-laden card draw here.