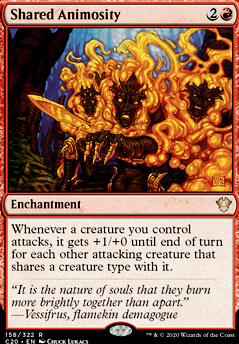 Whenever a creature you control attacks, it gets +1/+0 until end of turn for each other attacking creature that shares a creature type with it.

Shared Animosity occurrence in decks from the last year

Phoenix of the Black Rose
by relyks16

bushido_man96 it's really not, I can use Shared Animosity and accomplish a similar effect

Hi HannahBarbera, thanks for your suggestions. Anointed Procession tends to annoy me since it doesn't do a lot when the whole board is already set up (unlike Teysa, Orzhov Scion) but for now I moved it back in. Shared Animosity is a powerhouse for Edgar Markov

decks but I feel it doesn't really suit the aristocrats-style enough. I might end up putting it in later though. Once again thank you for the suggestions! ;)

Beautiful. Shared Animosity is the unsung hero of this build. Since weâre already running expensive rocks and the like we could upgrade to Snow covered mountainss with Extraplanar Lens and Gauntlet of Might, but Iâm sure you already know that. Battle Hymn would do us very well. As for new sh$t, Terror of the Peaks would do you very well and yet be hilariously underutilized (I kno how u <3 #jank). Also, Furnace of Rath (now Iâm just spitting your own flavors back at you). final though: I donât look forward to playing this deck.

Howâs it going! So if it have Najeela, the Blade-Blossom out and Shared Animosity out and I movie to attack. I attack with Najeela and two other warrior tokens, so I create 3 new Warrior tokens. My question is do the new tokens get the buff from shared animosity or just the original attackers?