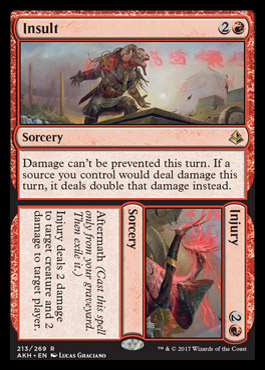 Damage can't be prevented this turn. If a source you control would deal damage this turn, it deals double instead.

Insult / Injury occurrence in decks from the last year

Akiri and Jeska
by GameBase54

Shadowspear and Loxodon Warhammer will work as good in breaking the symmetry, but redundancy is key in singleton, you could use this too.

How much your table will like playing against a deck like that, I can't vouch for, but that's probably the best way to force a win with this card.

If your goal is mostly voltron then I highly recommend playing both Deflecting Swat and Flawless Maneuver. Aurelia costs 6 mana, so you really don't want her getting shot. These two let you play her earlier and still have a high to make sure she doesn't die.

In addition, I would trim a lot on your 6-cmc slot. Aurelia is at that slot and it's already super crowded. I suggest trimming from there.

Another card I highly recommend, Insult / Injury. Having this card makes stuff like Spore Frog or Glacial Chasm less of a problem.