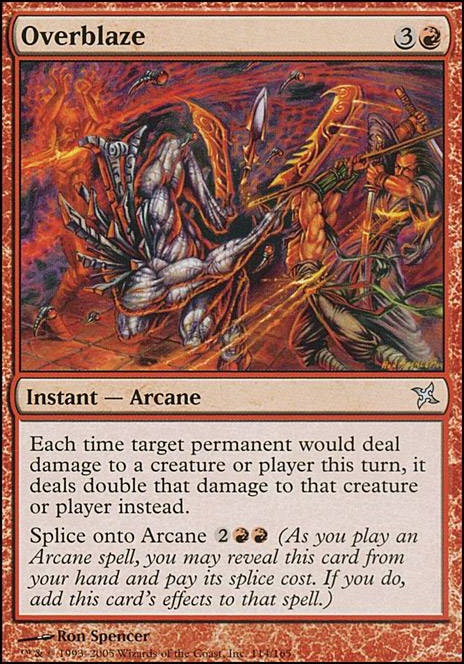 Splice onto Arcane (2)(Red)(Red) (As you play an Arcane spell, you may reveal this card from your hand and pay its splice cost. If you do, add this card's effects to that spell.)

The Incredible Hidetsugu
by ImprovedToucan

During a playtest on turn 7 had Bear Umbra and Snake Umbra on Borborygmos Enraged swinging with a spliced and hard cast Overblaze . So overkilled a player with 40 commander damage and ran out of gas of lands in hand with dealing only an additional 24 damage to another player.

ZendikariWol Thanks for the list! A lot of what you have are things that didn't make the initial cut for my list, but they're still very much considerations. You're right, I definitely am aiming to punch through with Feather for commander damage voltron-type wins, but I mostly avoided the straight stat-pumping spells in favor of more removal like Soul's Fire and more combo-type cards like Overblaze . My deck is also very much a work in progress, as Feather is such a tricky but rewarding commander to build around. My general philosophy with the deck, because RW is so poor at gaining card advantage, is to run a bunch of cards I wouldn't normally run (like Thaumatic Compass  Flip and Expedition Map ) to make sure I don't get mana screwed and make sure almost all my targeting spells have some kind of built-in advantage (like scry or draw). The ones that don't I just feel very iffy about.

One major difference in our lists is I seem to be going much more into the tokens strategy than yours--I've decided to play into the targeting theme with Zada, Hedron Grinder and Mirrorwing Dragon and have added Young Pyromancer and Spawning Breath to help with that. That's because I worry about running a voltron strategy and getting swamped by creatures I can't deal with. It's possible cutting those cards could lead to a more powerful one-punch strategy, but I also play this deck mostly in a multi-player environment and therefore feel I have to maximize card advantage whenever possible. For the record, this deck has historically proven to be pretty powerful and regularly takes out full tables of opponents. But there's always room for improvement. I'll definitely consider some of your card choices as I continue testing.

The most violent Ogre to ever have existed

Love Heartless Hidetsugu , used to have deck built around him myself.

Gamble is pretty affordable nowadays and should definitely be included.

Godo, Bandit Warlord provides a tutor for your lifelink equips.

Thousand-Year Elixir is the most expensive card I will suggest but it provides haste for HH and allows a second use of his ability. Very powerful here.

There are several more damage doubling cards you can include: Overblaze , Dictate of the Twin Gods , Furnace of Rath , Gratuitous Violence

Inferno Titan , Kamahl, Pit Fighter , and Shivan Gorge let you manipulate the life totals of your opponents. Getting everyone at an even number and turning HH sideways to kill the table feels great.

Finally, not a deck suggestion, but a warning. If you play with the same group of people consistently you may find yourself getting hated out of games pretty early on because of the instant death pressure you present. This was ultimately why I stopped playing and eventually dismantled my HH deck.

Best of luck, hope this was helpful.

K1ngMars on Help Finding Cards for a ...

I'd consider cards that tap all the creatures of your opponents (which also protects from incoming attacks your planeswalkers):

And I'd also consider cards that double the damage rowan can deal with her minus ability, so that you can better clean the board:

I'm also surprised that the deck isn't running Overblaze or Blazing Shoal. These combine with Desperate ritual (splicing it into those spells onto Zada) to provide a metric shitton of mana, often repeatable via past in flames or Mizzixing the arcane spell and re-splicing. Both can be alternate wincons with a large enough army.