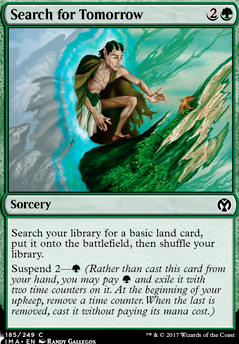 Search your library for a basic land card and put it into play. Then shuffle your library.

Suspend 2-(Green) (Rather than play this card from your hand, you may pay (Green) and remove it from the game with two time counters on it. At the beginning of your upkeep, remove a time counter. When the last is removed, play it without paying its mana cost.)

Search for Tomorrow occurrence in decks from the last year

Looks like a cool deck! I'm wondering why you chose to include Life Goes On and Underworld Dreams. Lifegain isn't especially useful in commander unless you have some specific synergies that it will power, and punishing opponents for drawing cards seems like it would go best in a deck that's forcing them to draw, like Nekusar, the Mindrazer. Unless your meta has a lot of decks that focus on card draw a little too much, in which case go for it.
I also notice that your mana curve is pretty high. Do you struggle with having enough ramp? If so, I'd replace either or both of the cards I mentioned above with some cheap ramp spells, like Search for Tomorrow or Rampant Growth

So I add the crazy idea of making a Tribal Plants Deck and I need to cast Avenger of Zendikar as fast as possible. I'm running mono green, and I need suggests on how to ramp. For now I'm running Search for Tomorrow and Explore that has a synergy with Gatecreeper Vine and makes me draw. But I'm not fast enough. Best I could do is six lands turn 3, but in the best case. Usually I'm able to drop seven lands (which is my aim) between turn 4 and 6. If there is a way to achieve that earlier and more often it would be great. Otherwise I will have to go for a more defensive style of play. Thanks for the help.

What really makes Golos, Tireless Pilgrim tick is a solid ramp package. Since Golos, Tireless Pilgrim puts a land into play when it enters, as long as you can add additional mana each turn, he will always be on board (which in itself is a massive threat due to his activated ability). However, a strong mana base is expensive, too get it cheaper, focus on green, and add reliable and cheap ramp cards:

(I would avoid the 3CMC and 4CMC ramp cards if possible, and minimize the number of lands that only produce colorless mana. Especially, if we don't have access to the expensive lands, i.e., fetch and shocks)

Then, depending on creature-based or not, look to add some Talismans/Signets and creature ramp. Of course, Arcane Signet, Fellwar Stone, Birds of Paradise, and Faeburrow Elder are all great additions, but are a bit more expensive. (Still cheaper than adding the ten fetch lands and ten shock lands, which would be better, of course. However, since Golos, Tireless Pilgrim puts a land into play, it is reasonable to get the WUBRG into play without an expensive land-base)

I think the standard recommendation of 10 ramp cards are too few and would look to get at least 15+ ramp cards in a Golos, Tireless Pilgrim deck. Each activation yields tremendous value!

So, you probably want to look at standard fires decks to get some ideas on the best ways to play fires. Those decks tend to be Jeskai or 4 color (no black). Both decks uses removal spells like Bonecrusher Giant and Scorching Dragonfire to gain time until casting fires, and the 4 color decks run uro and arboreal grazer to land ramp earlier. They then run color intensive cards like Kenrith, the Returned King and Cavalier of Flame to take advantage of fires, plus a good amount of card draw to consistently double spell for a few turns with fires out.

Given that, you probably want to adjust a few things. 1, assuming you're staying base green, more land ramp is probably your best bet. Arboreal Grazer, Search for Tomorrow, and plenty of other cards from Titanshift like decks let you play fires early and use it to its fullest, unlike something like Arbor Elf. You can run some removal like Lightning Bolt to help get there, but you have to keep in mind that you are going to be using most of your early mana to ramp and you won't be able to cast the lightning bolt at instant speed after you play fires. 2, be more ambitious with your payoffs. Cavalier of Flame and Kenrith, the Returned King are both color intensive mana sinks. You don't have to run those specific cards, but look for cards in the 5-6 mana range that have color intensive requirements and/or activated abilities that require mana. 3, have some way to get more cards. If you spend all your cards ramping into fires and playing lands, you may just play 1 or 2 spells before you run out of steam. I'd recommend Primal Command, possibly in conjunction with Eternal Witness. Tooth and Nail may be another option to explore.