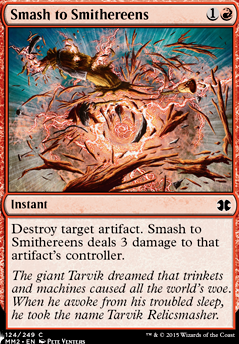 As for what I have on hand, I have the Crucible of Worlds

that I would value at $40, a playset of identical Pikachu Lightning Helix

that I would take $40 for the set, a foil promo Smash to Smithereens

I'd be glad to do Haldan, Avid Arcanist and Pako, Arcane Retriever as Shaggy and Scoob, though I'd need reference for the art style as sadly the gang has gone through many changes over the years.

Nice deck :)
What about Temple of Epiphany over Swiftwater Cliffs ? Scrying is more important than getting Life.
Since you have more than in your cards run 5x Island and 9x Mountain.

I'd run Smash to Smithereens over Damping Matrix: Matrix seems too slow.

I love baby Chandra :3 Now, pyrohelix is a very weak card, add a playset of Wild Slash in it's place and from there light up the stage is one of your better cards, you definitely want a playset. I would cut the electrofield since I think thats the next weakest card but you can keep it if you want, just go to 4 light up the stage. As fot the sideboard, you can start by throwing all your copies of claim the firstborn in there, and add 4 copies of Smash to Smithereens while at that. Good luck!