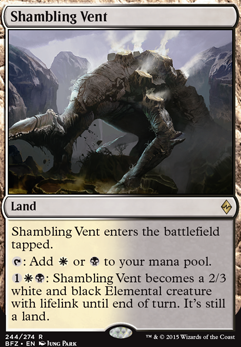 : Shambling Vent becomes a 2/3 white and black Elemental creature with lifelink until end of turn. It's still a land.

Shambling Vent occurrence in decks from the last year

Teysa, a woman of several tokens
by DarkRequiem

Yes, you can exile an animated land (like Shambling Vent) to make a token with Nightmare Shepherd; however, the token will not be a creature. It will just be a token copy of that land. You can activate its animation ability to make it a creature, though.

The reason for this is that the trigger from the Shepherd doesn't look to see what the creature turns into in the graveyard. Rather, it just checks if it was a creature when it left the battlefield. When you activate the animate ability of an animating land, it doesn't affect that land's "copiable values", the things that clone effects see, so the Shepherd trigger will make a copy of that land as just a land.

While most cards are worded in a way that makes sense most of the time, sometimes the wording can get in the way. Nightmare Shepherd is a prime example of this. This effect references the creature that dies is two places. The first is where it's looking for a creature to die. Simple enough. The second, though, references "that creature" once it's in the graveyard. This is still referencing to the creature that died, even if it isn't a creature in the graveyard.

Here's an example, I have animated a Shambling Vent. My opponent casts Murder killing my Vent, which triggers my Nightmare Shepherd. I can still exile my Vent. I get a token copy of that land. Now, here's where things get a little strange. The copy of the animated land is not a creature. Rather, it is just a token copy of Shambling Vent. It still has all the abilities of the original Vent.

Hope this helps!! I can give a more technical answer if you'd like, but there are a fair number of moving parts with questions around Nightmare Shepherd, so I don't want to over explain it.

Maybe Shambling Vent would help you on land, life gain, and can block for you.

Here is what I'm working on:

Hey, nice version of Teysa. I don't know if it's great or that competitive, but fine for casual.

Budget is obviously a concern therefore my card suggestions will be within the budget. With only two tutors (Intent, Diabolic) to get Darkest Hour and only two sources of repeatable draw (Mentor, Skullclamp) going to have a difficult time out valuing your opponents or even keeping up with them. My advice is expand on Skullclamp since it's your best source of card advantage with sac outlets and tokens. Include more ways to get Skullclamp and recur Skullclamp?