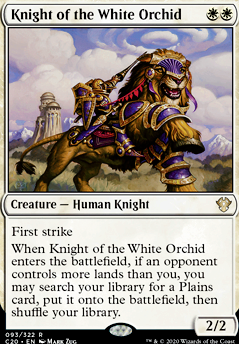 When Knight of the White Orchid enters the battlefield, if an opponent controls more lands than you, you may search your library for a Plains card, put it into play, then shuffle your library.

Knight of the White Orchid Discussion

Oh another thing, you should add some mana rocks and other ways to ramp. It doesn't seem like you have anything in here that ramps you. Ramp is very important as it allows you to get to your late game faster. Cards to consider are: Verge Rangers, Keeper of the Accord, Arcane Signet, Sol Ring, Thran Dynamo, Knight of the White Orchid, Weathered Wayfarer, Caged Sun, Nyx Lotus, Gilded Lotus. There are a lot more out there, some that may be better, but regardless, you need some ramp in your deck or else you will likely fall behind in your games. Good Luck out there!

I've made my changes, and I'm definitely going to make more, but it's looking better now I think. Originally, this deck was built around hoping to deck the opponent which...didn't really work most of the time. Now, with your suggestions, I've added the ability to actually kill an opponent off. Limiting the number of lands in play is also still a focus, but now the limit is 2-4, instead of 0-1, although either can work I think. Knight of the White Orchid is still in my maybe, as I have to play a bit more to see if getting lands out will be an issue for me. Honor of the Pure is a card I want to add, but I'm not sure what will be worth it to swap out for Honor. Like I said, more testing will show me what to do next I think. Once again, thank you!

Hey, I'm glad you found the suggestions helpful! I took another quick look at the deck to see if there was anything else I could point out. I hope you don't take it as criticism, your existing build is already quite interesting imo. Nevertheless, here goes:

The only thing I might suggest is that with a relatively low mana curve like you've got, that you might look into adding some Card Draw like from Bazaar of Baghdad, Revitalize, or something along those lines.

You might also get away with less than 24 lands given this deck's low curve; you could even supplement it with Land Tutoring available from cards like Knight of the White Orchid, Tithe, and/or Gift of Estates.

Also, while I acknowledge that he's a little pricey to order singles of, Stoneforge Mystic is hugely beneficial to decks relying on Equipment conditions as a primary Win.

Oh sorry. I thought this topic was about Pioneer.

We've had no problem with getting Knight of the White Orchid out on Turn 2, with a Selesnya deck. Been playing the deck first as Standard, then Frontier, now Pioneer.

If we don't have the colours for the Knight, we just play Sylvan Advocate instead.

There are other reasons we need Plains and Forests in the deck, like Show Lands.

Anyway, thanks for your help.

Peoni: Thank you!!! Great suggestions as usual :) I had actually been thinking about adding Knight of the White Orchid. Didn't know about Oreskos Explorer (I didn't use to keep track of non-modern legal releases haha) and I love it now! Definitely gonna add them. I'll keep Weathered Wayfarer in mind for future upgrades. Mask of Memory I just need to figure out what to take out for! Also trying to figure out which budget wraths I want, hehe.

And yeah, these partners are a lot of fun! They might take Tana's place. The deck feels a lot more solid and consistent, and being able to get some bigass equipments like Colossus Hammer on Rograkh consistently is just so awesome. It also doesn't hurt that I can build it for quite a bit cheaper! But all in all making all these decks and looking up cards for each of them really helped me get a feel for the format and to see what people play and why and it's definitely gonna help when I start playing it for real, not to mention it was a lot of fun.

M4dGun: Heh, thanks!!! Equipment decks are awesome, aren't they? Balan did seem like the strongest possible option, but I'm in love with this new pair that can start getting equipment on them turns earlier while being super gimmicky and unique (things I appreciate!). They miss out on the double strike but I think they make up for it with Rograkh's keyword soup and raw Kobold flavor, hahaha. I don't know about the rest of the internet but I think I was the first here on Tappedout to put together a monowhite list for Rograkh and I'm really proud of it haha. I started with Keleth, Sunmane Familiar, but as soon as Ardenn, Intrepid Archaeologist was spoiled I knew no partner was going to be better than him and that I just had to do it. Thanks again for the comment!

The main thing I'm concerned about is since you're cutting the green out your ramping is going to be pretty rough. White suffers the most from lack of ramp and draw, but then again this is a voltron deck, so you might not see any major issues. Boros Signet, Knight of the White Orchid, Oreskos Explorer are all pretty nice budget options for ramp. Weathered Wayfarer is pricier but also good. Moving Mask of Memory into the main would probably be beneficial. You'll probably also want at least one boardwipe in Wrath or something similar.

This deck looks good too. These partners are bound to be nasty. :^) No more Tana then?

There is another type of card they wouldn't be so good with, and that is Knight of the White Orchid

Although you would probably still have lots of search options for a deck with the Plains type, in Pioneer.

I didn't know Path to Exile was legal in Pioneer. It would fit my deck beautifully.