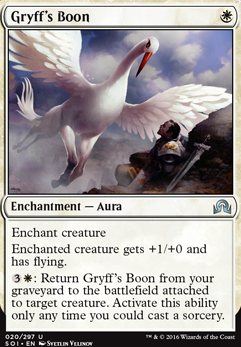 Enchanted creature gets +1/+0 and has flying.

: Return Gryff's Boon from your graveyard to the battlefield attached to target creature. Activate this ability only at any time you could cast a sorcery.

Gryff's Boon occurrence in decks from the last year 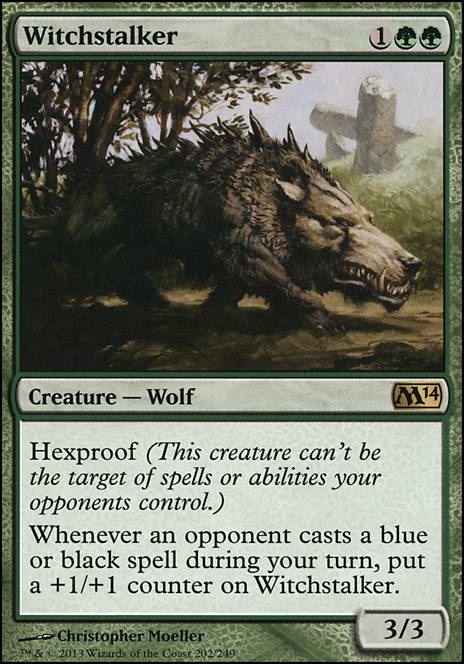 Urilly Hate This Deck That Much?
by Benchwarmer247

Let us Go on a Bike Ride: Uril Storm Primer
by Sultai_Sir

Wavebreak Hippocamp seems like it would be a nice include, as a second Rashmi that also counts as an enchantment for the purpose of enchantresses + Kestia triggers.

Not 100% sold on it but another thing that came to mind about cheap CMC auras was Instill Energy and Mind Harness but without the totem armor/buff, they might not do enough to warrant adding.

One that might be worth running--even with the Rest in Peace--is Gryff's Boon for the cheap CMC evasion + the ability to recur if it ever falls off.

I like playing white weenie in pioneer, so please see my bellow recommendations.

I recommend reminding the Giant Killer and adding 1 more Declaration in Stone because dec in stone allows you to kill any creature, whereas giant killer only focuses on 4 CMC or higher.

I recommend removing 2 plains and adding 2 Knight of the White Orchids because the knight acts as a quasi plains and it's awesome to play it on turn 3 because you get to put a plains onto the battlefield and then play your land for turn, thus, giving you 4 lands on turn 3.

I recommend removing the Legion's Landing Â Flip and the Gryff's Boon for 3 Boros Elites because it is a lot of fun attacking with 3 creatures on turn 3 and making the elite a 3/3 creature (that's a lot of 3's :D).

My suggestion would be to run Flickering Ward over Whip Silk. Having more ways of protection and evasion is never bad. Only downside is you have to be careful to not remove auras already attached to your creature with protection from green and or white. Also would consider Gryff's Boon, more evasion and it is re-curable.