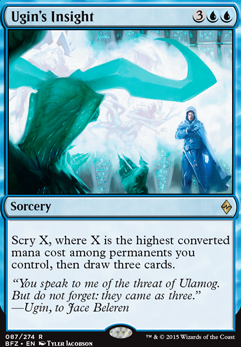 Scry X, where X is the highest converted mana cost among permanents you control, then draw three cards.

Ugin's Insight occurrence in decks from the last year

BackwardsChart, here is my idea:

+1: scry X, where X is 1 plus the highest converted mana cost among permanents that you control. You lose X life.

-2: return target permanent to its owner's hand, then that player discards a card.

I modeled his first ability after Ugin's Insight, which I felt would be interesting, if he had been corrupted by Bolas. I added a life loss clause to it to prevent his controller from abusing that ability and use it more strategically. His second ability is modeled after Recoil, which I feel was an appropriate ability for him, and his final ability is similar to Traumatize, to continue with the theme of Jace erasing peoples' memories, with an added ability to show Bolas's corruption.

My new challenge is to create one or more "commands" named in honor of any of the four-colored commanders introduced in Commander 2016, costing one mana of each color and having one ability for each color; if you choose to make multiple cards, no ability should be repeated between any two cards.

sonateroarctico, thanks for the support. I recently pulled this deck out again and discovered that Ugin's Insight is less useful than when I started, but other than that it's still super fun to play.

You don't want X spells in Yennett. That's why I love my draw to be stuff like Ugin's Insight. It becomes a lot better when you've got Yennett out and get to cast it for free.

I think you might want to add a few more higher CMC things to the deck to take advantage of the life drain. Cards that help set the top of your deck like Ugin's Insight, Soothsaying, and if you feel like dropping the ca$h Scroll Rack. I don't love Skeleton Key or River's Grasp very much.