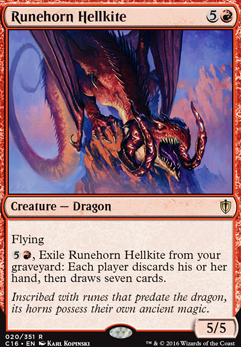 , Exile Runhorn Hellkite from your graveyard: Each player discards his or her hand, then draws seven cards.

Kaalia: a Tale of Burning Rage
by MindAblaze

Akiri, Wheels of Wrath
by RadKnight

I run a similar list but Jund. Gotta streamline that Primal Surge combo!

Wheel of Fortune could be Runehorn Hellkite or Dragon Mage

Chord of Calling could be Birthing Pod

Reclamation Sage should be Acidic Slime since you run Manglehorn already and hitting lands is crucial.

All could be good fun

Some suggested additions for the time being, don't necessarily need them all: