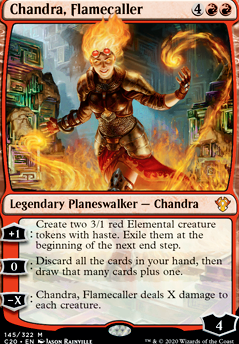 +1: Create two 3/1 red Elemental creature tokens with haste. Exile them at the beginning of the next end step.

0: Discard all the cards in your hand, then draw that many cards plus one.

Draw your Victory
by Jking0808

+1 Create two 3/1 ELemental creature tokens with haste. Sacrifice them at the beginning of your next end step.

-7 Chandra, the Firestorm deals damage equal to half your life total, rounded down.

I like Chandra, Acolyte of Flame's Elemental tokens, (awwwww! they're so cute!) but Chandra, Flamecaller's tokens are much stronger.

Shabraz, Terror of the Nimbus

Thanks greyninja! I'm generally not a blue player but If you cant beat em, join em. I got most of these counter spells for my Narset deck. Im still looking to pick up a mana drain though ( thats why its in the maybe ). Ill be sure to check yours out and suggest some things if needed.

Dovin's Veto is one of the better control cards in magic. I just haven't found a spot for it and I need to pick one up.

I have Chandra, Flamecaller in my maybe board. I do think she would fit the deck very well but im having trouble taking cards out for another planeswalker. She is also very expensive for just using a wheel effect.

Jeskai Ascendancy is a good card but im not sure we could abuse the first bit of text. We are already growing our generals at an absurd rate so getting an extra 1 or 2 damage doesnt help us much. Untapping is nice but im not sure if its worth it without some kind of combo that im not aware of. Lastly, the line of text saying we can discard and draw whenever we cast a noncreature spell is very much in our line of play. The only thing I wonder is if its actually needed. We are already cycling through our library with wheel effects and hopefully keeping our hand full of things to do. I will say that the deck needs more things to cast before 4 mana. Alot of the times it feels like I start the game at turn 6 getting my generals in play. Maybe this is what i need to fix that.

Thrill of Possibility fits into the same logic as before. Im not sure I need more draw spells when im consistently drawing 7 ( or close to it). Something to think about for sure tho. Much better with Jeskai Ascendancy and Whirlwind of Thought