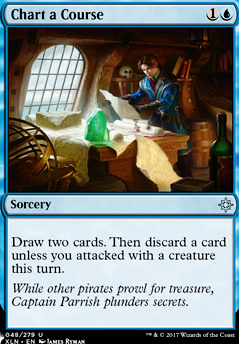 Draw two cards. Then discard a card unless you attacked with a creature this turn.

Chart a Course occurrence in decks from the last year

very cool deck. never seen this combo before, nice!
looks pretty competitive, it is interesting to me that you are not running Mystical Tutor.
given that your commander has white you could in theory run Recruiter of the Guard to tutor kiki jiki, as a backup to Imperial Recruiter.
Chart a Course is an interesting choice, i like that it can net you positive cards, but generally i would run instants like Anticipate or Brainstorm over this just to have the instant options. especially if you are trying to be competitive. and you are running several counterspells so instant speed seems good.
speaking of counterspells Arcane Denial and Delay are good options in 2+ colors, but im sure youve seen those before...
also Char-Rumbler is cool but at a 4 drop, is this guy pulling his weight? i would run Archaeomancer over him. but maybe he is needed for the mutate value...
anyway cool deck and hope my thoughts are not useless to you and keep on having fun! cheers

Baral, Chief of Compliance's mana reduction ability doesn't actually reduce anything outside of your sideboard. He might be relevent if you are sideboarding in your playsets of Negate and Chart a Course though.

my storm deck has 4 Gifts Ungiven and 4 Baral, Chief of Compliance. They both make a very large difference and I recommend them. I would play 4 Opt rather than 1 and cut Peer Through Depths, Desperate Ravings, Divination, and Chart a Course. Also 4 Goblin Electromancer instead of 3. Good luck getting it faster!

For me, I feel like dragons aside, we have 10x flex slots that are more/less meta dependent, split among permission, reanimation, and single-target removal. Could be a good starting point for tweaks to address meta issues: