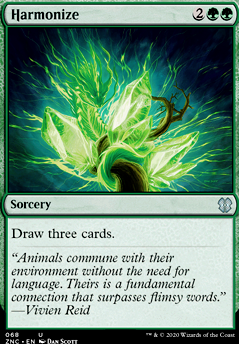 I love plants, and you should too
by cordiaL

If you go into the woods today...

You could cut down on the basic lands. if you have enough land ramp, you only really need like 36 lands, which can include your Kazandu Mammoth Â Flip since it's a land on the other side. I'd suggest something like 2 mountains, 2 islands, 1 plains, something like that. You can also swap Harmonize and Shamanic Revelation with other draw options, since harmonize is like, base level, cheap draw for green, and there's lots of other options for it, and shamanic revelation kinda relies on you getting a token generator, or spending several turns bringing out a bunch of creatures, to get a good number of cards.

If you really want a "draw some cards now" Return of the Wildspeaker costs 1 more then harmonize, but will put in a little more work if you get bigger creatures out, and has the option of pumping your army late game for a potential win.

You can also go without Jungle Shrine, since it's not very searchable, comes in tapped, and doesnt tap for blue. If you need the colors, Exotic Orchard and Path of Ancestry are cheap options that (can) tap for all four colors.

Harmonize especially in decks that have blue. Seriously, would anyone consider putting Concentrate into their decks? Then why it's color shift? And on that note Mulldrifter too since for a lot of decks it's basically Divination but worse since blue can recur spells, but not creatures.

OPtional: or Guardian Project or Creakwood Liege or Harmonize or

If you're looking for something to replenish your hand, maybe Lead the Stampede or Harmonize.