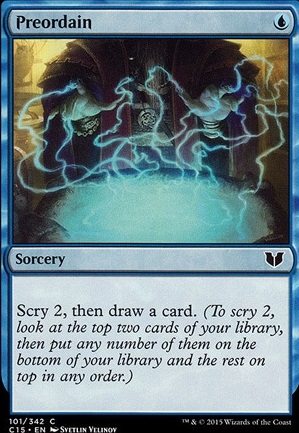 Scry 2, then draw a card. (To scry 2, look at the top two cards of your library, then put any number of them on the bottom of your library and the rest on top in any order.)

So some more fine tuning below:

Still looking for suggestions, and feedback :)

ImaginitiveRascal- Thanks for the suggestions!
Unfortunately, the scry-first spells Preordain and Ponder, are not modern legal. My playgroup keeps everything modern casual/competitive, to keep away from the cookie cutter competitive modern meta.

However, you've given me an idea for another suggestion and game finisher, Visions of Beyond.

Thanks again and play hard!!

so, I'm not really sure what this format is but a few cards that can be considered are Fatal Push, Swords to Plowshares, Path to Exile, Delay, Counterspell, Serum Visions, Preordain, and Brainstorm. These are all generically good cards and should help you do your game plan with ease.

I think running Hieroglyphic Illumination or Serum Visions instead of Of One Mind and Preordain instead of Brainstorm would just be better.