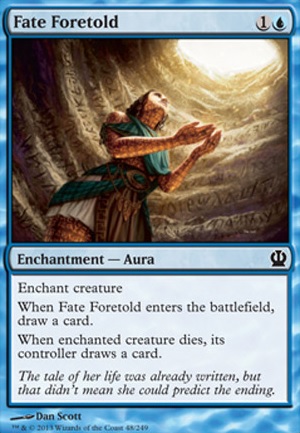 When Fate Foretold enters the battlefield, draw a card.

When enchanted creature dies, its controller draws a card.

Alela, Queen of Signets
by xMimic

The Legendary Banana Deck
by whizad

Is Fate Foretold a little slow? It seems a little slow. Still, you forgot the best voltron boar wipe of all time: Divine Reckoning.

Quite the rebuild but, you have so many different cards at different mana-speed-levels that the deck won't perform very consistent

I'm not sure Betrayal is a perfect solution for this deck. It's definitely an anti-combo with Rootwater Matriarch (if you were to steal a creature enchanted with Betrayal it would immediately lose the enchantment and then return to it's owner's control).

My favourite bad card is Thassa's Devourer because I had it in a mono U mill deck in combination with Fate Foretold and Riptide Chimera. I thought it was the coolest combo in existence, and I still have that old deck lying around...

For competitive things, I really like Delay. It's the closest thing modern has to Counterspell imo.