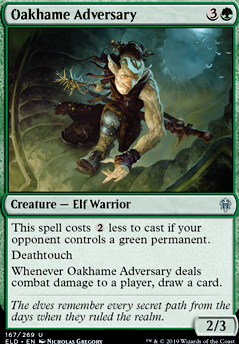 This spell costs less to cast if your opponent controls a green permanent.

Whenever Oakhame Adversary deals combat damage to a player, draw a card. 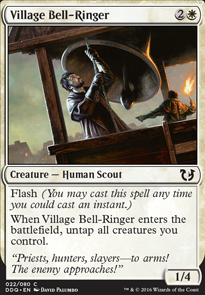 Najeela the Tempo Queen
by noctis366

No problem! I'm sorry for missing those other cards you mentioned.

I don't think you should remove the sunforger package. Just Tithe. I understand the combo and I think that can be pretty great IF you get the pieces on board. In my opinion, Tithe isn't worth a slot in this deck. Im a big fan of immediate value. The turn you use Tithe, you'd essentially be discarding a card (Tithe), missing a land drop (since Mistveil has to come in tapped), and even spending a mana to do that (paying for Tithe).

You'd essentially be down a card and 2 Mana to do nothing that turn.

Sunforger is incredible though. Super powerful. I'd just be sure to have a variety of 3-4 drop instants so that you have an answer to every situation. Graveyards, creatures, enchantments, artifacts, lands, everything.

I guess my main point about the card draw was to have cheaper or more explosive card draw. Oakhame Adversary is 2-4 Mana for a creature that might draw you one card per turn if it can attack and not die. Night's Whisper is 2 Mana and gives you 2 cards right now with no conditions. Hunter's Insight is 1 more Mana and would have the potential to draw you a ton of cards and is still contingent on combat.

Stergios None of the Eldraine cards were really that interesting, unfortunately.

cuckfamilo DivineKhaos Arasta and Nyxbloom Ancient both have a lot of potential, and I'm planning on testing both of them. Arasta is a pretty decent token generator and Nyxbloom is a tutorable Mana Reflection on steroids.

However, I think the most exciting card from TBD for Freya is actually Nylea's Intervention. I think the card at minimum is as good as Expedition Map (3 mana to tutor for a land), and scales wonderfully with extra land drops, letting you tutor for Nykthos + Cradle + Temple for only 3GG. The second mode is also incredibly relevant, as it gets rid of flyers that we often have trouble dealing with. Whether Intervention replaces or is run in addition to Map is yet to be seen, but I think space is tight enough for a 1-for-1 replacement.

Space however is getting extremely tight at this point. I think the most likely cuts at this point are some combination of Bane of Progress, Ramunap Excavator, and Beast Whisperer (each having their ups and downsides). You could also consider cutting Greater Good or Song of the Dryads, but the former is still quite necessary for a good number of combos while the latter is powerful removal. I think you could also consider cutting ESG, but I think fast mana is still quite important.

Finally, Oakhame Adversary could also be considered depending on meta, but my problem is that the only way it fits onto the T3 Freya curve is if you have a double dork opener (T1 dork, T2 dork + Adversary, T3 Freya). In all other situations you can't cast it on T2 and still hit T3 Freya.

I came across this card while researching for stuff for my Alesha stax deck. That decks goal is to slow the game/cut off combos and accrue advantage, which is why it caught my eye. I don't imagine the card being too viable in fast combo, like Bob is, mostly due to the CMC and board requirements. I'm still intrigued in the value it can generate in a grindier match up though, especially seeing how effective the Yuriko, the Tiger's Shadow trigger is. Being able to hit all 3 players simultaneously makes the damage dealt FAR more efficient.

Interesting, my biggest fear for the card would be not getting the cities blessing consistently. What kind of a deck or shell did you run it in?

One of my biggest considerations for its inclusion is how much it pressures Ad Nauseam and Necropotence, the "life total into card draw" cards. Have you run into this or played it outside of competitive? Would love to know hear about it.

Bob does come out way faster, and guarantees the card, which is why its so good. Prophet is significantly slower, with higher risk of being staxed out due to its higher CMC. I would agree that most decks would rather slot Ad Nauseam in its place. Something to consider is how Prophet could dig for and also power out an Ad Nauseam too.

I often see Oakhame Adversary included in lists, and it seems very strong. Oakhame requires combat step to work though, and deals damage at a slower rate to players. It seems like more a card advantage engine than anything, where Prophet seems right inbetween card engine and backup wincon.

Obviously I don't want to overestimate how much damage is coming from those life loss triggers, but realistically you'd aim to exploit it with format staples like Sensei's Divining Top Imperial Seal Vampiric Tutor and so forth. Especially if you're packing anything with CMC 6+, you can speed up the clock on beatdown.

I don't imagine combo oriented lists will want it like they do Bob. I'm think it might have a home in stax or insane value lists though.

Great insight. Cities blessing seems like you can attain it decently fast unless you get wiped.

Is Prophet a big target when it hits the board? Is the lifeloss from the drawing trigger significant to your beatdown? Any nice synergy cards you run alongside it?

In blood pod there are just better options. Oakhame Adversary seems to be the tech most are using in pod/4c lists. Should almost always be 2cmc for a 2/3 deathtouch. Additionally, it's an elf which synergizes with Priest of Titania . I like the prophet in tribal decks just in cedh decks I dont think itll fit. Space is tight even in 99 card decks.

To anyone looking for Eldraine updates to the list, Drown in the Loch has proven its worth and viability. I wouldn't expect to see many other major updates from Cameron otherwise. I suppose Oakhame Adversary is something to consider as a card advantage engine too, but I think that's a bit more meta dependent.

Oh, I more or less know what I am going to cut, don't worry about that. I was just expanding on your original comment's mention of how I utilize stax pieces to slow the game down. Tangle Wire is incredibly relevant in cEDH metas and it breaks parity with itself. Collector Ouphe as proven to be ridiculously strong, so a Null Rod furthers then cause. Ohran Frostfang it performs quite well since I set up on other people's turns and attack on my own, so far it's drawn about 4-5 cards the games it makes it out.