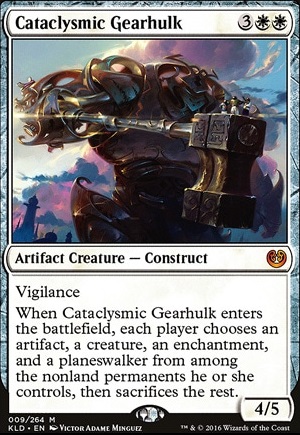 When Cataclysmic Gearhulk enters the battlefield, each player chooses an artifact, a creature, an enchantment, and a planeswalker from among the nonland permanents he or she controls, then sacrifices the rest.

Cataclysmic Gearhulk occurrence in decks from the last year

Match 1 4C Super-friends - Result 2-1 Round 1 was long and painful as he proceeded to play and ultimate 2 Teferi, Hero of Dominaria in addition to 3 Teferi, Time Raveler , 2 Narset, Parter of Veils and an Oko, Thief of Crowns . Round 2 went much better with Noxious Grasp removing the first 2 planeswalkers and finishing off the match with some hasty gearhulks. Round 3 was a wash as he was unable to fix his colours.

Match 2 Versed Izzet Phoenix - Result 2-1 Lost Game 1 to 3 instances of Treasure Cruise which just overwhelmed me with card advantage. Round 2 went much better with Leyline of the Void proving backbreaking for the cheap phoenix plan. Game 3 was very close as I was lucky to have to correct removal for the threats presented. E.g. Declaration in Stone and Cut / Ribbons to remove his Thing in the Ice  Flip before it was able to flip. Combustible Gearhulk was a standout hitting the opponent for 17 damage with an amazing blind flip.

Match 3 Gideon Tribal - Result 0-2 This was short and painful as I was unable to really interact with the deck apart from Cataclysmic Gearhulk forcing him to sacrifice an excess Gideon. Abrade was helpful against Heart of Kiran but without one in hand I was just dead.

Match 4 Mardu Vehicles - Result 0-2 This match-up has a very similar problem to the previous game where I was unable to interact with my opponents vehicles Heart of Kiran + Smuggler's Copter , Planeswalkers Gideon, Ally of Zendikar + Liliana, the Last Hope which get around the sorcery speed of most of my removal or even his creatures with Hazoret the Fervent being indestructible.

I may need to switch up my removal package with more versatile spells such as Dreadbore to deal with planeswalkers or Bedevil to deal with artifacts as well.

@NensouHiebara
I mean costly in the sense that it essentially is Day of Judgment for extra. It is restrictive because it only hits creatures, whereas Austere Command and Cleansing Nova have the option to hit artifacts and/or enchantments instead.

Obviously, I would not advice taking out Cataclysmic Gearhulk , the natural cut (as in card that currently has the same function) would be Wrath of God .

P.S.: Am I mistaken or is Sword of Light and Shadow currently the only way to reuse the Realm-Cloaked Giant's boardwipe part?

Seems deece, but the boardwipe part is quite costly and restricted. I don't know if the body makes it worth it.
Kinda looks like a worse Cataclysmic Gearhulk .

Cataclysmic Gearhulk is one of the better sweepers in this deck.

Potentially take itself out? That's what I expect. It's a sweeper that can be used repeatedly with my artifact and creature recursion.

I'm thinking you'll want to maximize on artifacts that are sacrificed in order to reap great benefit.

If you want access to some great ramp for you deck, Tooth of Ramos and Heart of Ramos will allow you to get 2 mana from them. After they are sacrificed, if Gerrard dies you get them back for free. Now I'm not sure on the technicality / legality of it, but I believe Horn of Ramos , Skull of Ramos and Eye of Ramos can also be used in your deck. Their errata text contains the mana symbols, but the physical cards do not; They list the color by name, not by identification. So I believe they are legal in all decks, regardless of colors.

Probably a few I missed but there you go.

Caerwyn on The Wheel of Time's Rand ...

I do not really see how untapping represents building alliances, and I still think it is far too easy to enable untap abilities. With a whole host of enabler cards, your ability pretty much reads "whenever a creature enters the battlefield, put a +1/+1 counter on it and Rand."

Instead, you could just make it a Tap ability - from a flavour stance, I think that works better, given that gaining all those alliances was a fairly slow process, better represented by the creature having to spend a turn out of commission.

Also, as written, I don't think this card necessarily needs Green - it is a lot like a super Bolster, which is a White-based ability. Also, from a flavour stance, Rand was not really a Green character at that time in the books.

I think the addition of Black would both be flavorful and would help with the card's colour identity. would probably be a good cost.

When White has abilities which cause a sacrifice as a wrath effect (rather than the common "sacrifice an attacking creature") they're flavoured such that the focus is on what can be saved, rather than what is going to die. Cataclysm , Balance , Balancing Act ,, Cataclysmic Gearhulk , etc.

This should be an exile effect. After all, this card is presumably regarding the period of time where Rand is a bit off his rocker--to include the time he uses balefire to "exile" an entire fortress and its inhabitants from existence.

I think the addition of Red to the last card would be apt from a flavour perspective and would work well with your abilities, as discussed above.