Sandsteppe Citadel occurrence in decks from the last year 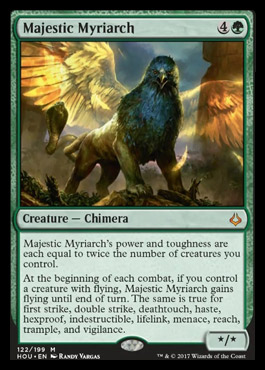 Hey, lots of good cards here, but the part of your deck that needs the most improvement is the manabase. Even on a budget there's lands to consider adding.

Life and Limb + Sporemound is a infinite Sap tokens combo. Winding Constrictor puts more spore counters on creatures. When creating a lot of tokens then Mentor of the Meek, Good-Fortune Unicorn and Champion of Lambholt are nice three drops with repeatable abilities.

multimedia, thanks for the comments and suggestions. I'm definitely looking for a Hand of the Praetors & Guardian Project , but couldn't find either one at my LGS when I was building. I didn't realize that Cabal Coffers showed up twice, I just fixed that as well. As far as the dual lands and check lands, I'm definitely working on finding those as well. Totally misread the Sandsteppe Citadel and added it thinking it was Sultai and not Abzan, thanks for catching that. I'll look around for the Shrieking Drake too since that could easily end games. Appreciate all the ideas!

You won't like it but I would still recommend getting rid of one Deathrite Shaman and putting one Sandsteppe Citadel in its place.

You just don't want that Creature early in the game.

Have you considered Yahenni's Expertise instead of Witch's Vengeance ?

I can see why you have it - to protect your Creatures while getting at least some board wipe of the other field of something like Zombies, but it does have its limitations.

I just noticed that you have no card draw. We've been using Tireless Tracker in StuBi's deck to excellent effect. You really need some for games that go long.

Questing Beast or Scavenging Ooze could be removed for it, depending on which one you find less useful.

If it were me I'd take them all out, but it's dependent on taste and play style.