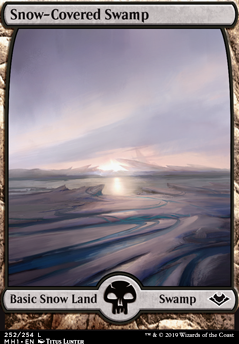 If you run Snow-Covered Swamps and Snow-Covered Forests, you could run Withering Wisps instead of / in addition to Pestilence.

I'm super happy to see such a good landbase for a mono-deck. Nice! +1 The only lands I can recommend are maybe a Crypt of Agadeem because of the graveyard, and Cabal Coffers if you have the budget. Also, if you want you could always take out your basics for Snow-Covered Swamps because they function and are the same identity wise, but they also can be good against the few people who play snow decks. Its not much of a difference but hey, you never know

The idea looks fun but I would redesign this into a Mill deck. You can still use the crabs you have, plus you can use Horseshoe Crab and Ancient Crab in combo with Phenax, God of Deception. Take advantage of those crabs' high toughness.

Fraying Sanity helps you win the match much faster. Visions of Beyond is a cheap hand-refuel card if you follow the Mill idea.

After that you need spells to answer your enemy's moves. Counterspells and removal will help you survive. There's also a lot of non-creature spells that Mill, like Glimpse the Unthinkable.

-1 Burgeoning, +1 Worldly Tutor. Just running the playtesting made two things clear: Burgeoning isn't going to pay off all that much, and the deck needs either Crucible of Worlds or Ramunap Excavator to make it into play to get the engine churning. Adding the tutor will ensure that will happen more reliably. The Gitrog Monster is also pretty important to find too, so I'm likely going to find spots for the Demonic Tutor anyway as well as a Chord of Calling.