Search your library for up to two basic land cards and put them onto the battlefield tapped. Then shuffle your library.

Explosive Vegetation occurrence in decks from the last year 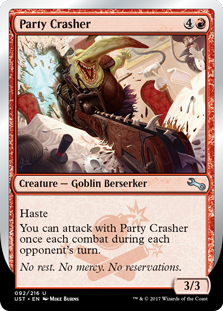 Riku of two ends
by Grimsonwolf

6yo me would be proud

This deck looks like a lot of fun. The cards that i could recommend are Conjurer's Closet or other cards that can flicker your creatures. maybe Harrow and or Springbloom Druid instead of Circuitous Route and Explosive Vegetation. You could also go for a creature search in the deck if you want to more consistently pull out combo creatures, maybe Eldritch Evolution or something along those lines. You could even have a win condition with Risen Reef and Laboratory Maniac if you can consistently draw your deck. This looks like a fun deck to play against.

Cards to consider: Kiora, Behemoth Beckoner cheap usefull + draw engine Repudiate / Replicate make a cheap copy of your Stormtide or any other usefull Wash Out Just Dont pick green or blue +++ ALL PERMANENTS (lands to) Migration Path for Explosive Vegetation same but one has added cycling ( you never know )

Land-based ramp is always safest because of things like Vandalblast and Hour of Revelation, et al. Since you're running Green you may as well take advantage.

Mana dorks are usually fantastic ramp pieces due to their low cost and high speed, but a board full of dinosaurs will tempt wraths like crazy and you don't want to lose your ability to rebuild along with them. Also, you are aiming for the higher CMCs and dorks are better for getting 3-drops on turn 2 or 4-drops on turn 3. That said, I would still run the dinosaur-specific rampers for fun and flavor and Sol Ring for it's power.

I would aim for at least eight pieces of ramp, and probably closer to 10-12 considering how much dinosaurs and your commander cost. My brother has a good budget-ish list (Dig Up Her Bones) and Gishath usually gets whacked immediately due to the existential threat she poses to the table. As such, you should plan on your commander costing 10 mana a good amount of the time.

A fun piece of budget tech for Gishath: Nahiri's Machinations

Gidgetimer on How does Scute Swarm with â¦

The first Scute Swarm copy is not made until after both lands from Explosive Vegetation have already entered the battlefield. Therefore, it will not be able to trigger from the second land.

sigh166 on How does Scute Swarm with â¦

As the title suggests I have Scute Swarm with 6 lands.