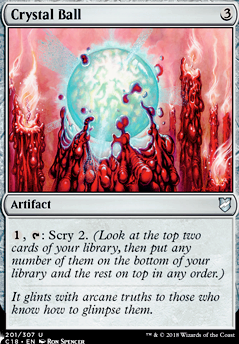 Crystal Ball occurrence in decks from the last year 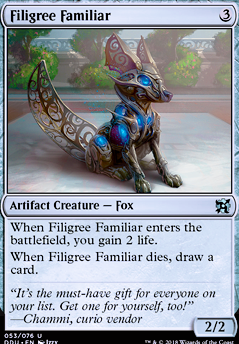 RNR_Gaming those are some good suggestions! I tried to look for cards that could bring as much recurrable top deck manipulation as I could, Castle Vantress, Crystal Ball, Psychic Impetus, and Sigiled Starfish as examples. Cards like Brainstorm and Ponder are pretty powerful for one-time plays, but I was trying to seal the long game with the previously mentioned selection. However, I suppose that same argument could be used against the inclusions of Savage Beating and Seize the Day, though I thought getting in extra attacks could mean more triggers and potentially game-winning plays so I made an exception.

As for Sensei's Divining Top, I was considering it, but I was looking to budget some of the options to keep things within as reasonable as a price range I could.

Thanks for taking a look! The feedback is appreciated!

I have replaced Crucible of Worlds with Crystal Ball, since this deck does not contain any lands that can sacrifice themselves, making the ball a far more appealing option for this deck.

MindAblaze, DrukenReaps, I am actually surprised by your suggestions, but I do appreciate them, very much, since I was planning to keep the crucible, but you are both correct; this deck does not contain any lands that sacrifice themselves, so Crystal Ball is definitely better. Thank you very much for your suggestions.

MindAblaze on Crystal Ball or Crucible of ...

Do you play fetchlands? Strip Mine et al.? Cycling lands? Dredge of any sort, especially Life from the Loam? Any other way that you put your own lands in the graveyard?

If so, Crucible. If not, Crystal Ball is repeatable top deck control for a reasonable cost.

I have a copy of Crucible of Worlds in my five-colored EDH deck, which is definitely an awesome card, but I am wondering if I should replace it with Crystal Ball, because that card is also very awesome.

I am experiencing difficulty with this decision, because, while WotC has not been emphasizing land destruction nearly as heavily as it once did, land destruction does still exist, so the ability to play lands from the graveyard is very valuable. Crystal Ball is very nice, but the deck does already contain both Arcane Encyclopedia and Temple Bell, so I am not certain if it really needs to have the ball.

What does everyone else say about this? Should I replace Crucible of Worlds with Crystal Ball?