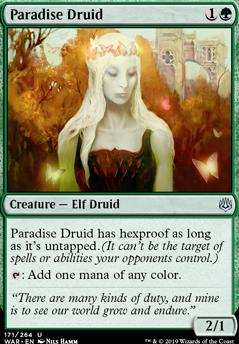 Paradise Druid has hexproof as long as it's untapped. (It can't be the target of spells or abilities your opponents control.)

The Guardians of Thune *Angels in Pioneer Primer*
by Hexaflexagon 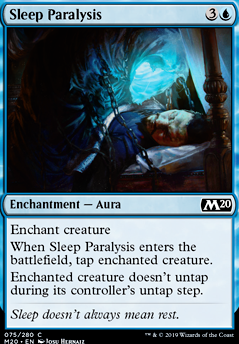 Hello TheLordStormCrow, I agree I think Elvish Mystic or Llanowar Elves should be in the deck instead of Paradise Druid original Incubation Druid. Iâll play test with them. Thanks for the feedback!

I really like the looks of this, also the colour combination is Bant not Abzan :P. Althought I would try to put in more elementals to get more value out of Risen Reef such as Cloudkin Seer or Healer of the Glade against aggro or even Leafkin Druid (although Paradise Druid is probably better for a 3 colour deck) or any of the 3 Cavaliers.

I designed the deck for Bo3, and in Bo3 Leyline Prowler works well (even it finished Top 8 in a Grand Prix inside a Golgari midrange). If you play Bo1 the cards that you say can be good, and also I think that Legion's End in the maindeck will be fine, (for Bo1) because Cry of the Carnarium kills your Paradise Druid and that can be relevant sometimes. But thanks for the suggestions :)