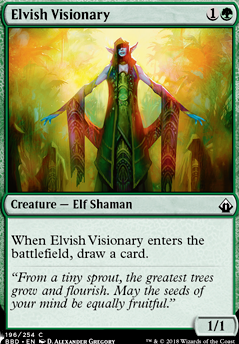 When Elvish Visionary enters the battlefield, draw a card.

Elvish Visionary occurrence in decks from the last year

Enlightened_Magi try the cardkingdom storefront as your default pricing display (it's an option in your settings). I say this because I can't hand connect prices of promos to the tcgplayer storefront, not with what tcgplayer gives us. But I can do so for cardkingdom, so they are usually more likely to be present.

Hello everyone, long-time site supporter and user but I haven't posted here in a couple years.

How do we go about fixing the price point of a card? For example:

The two foils share the same price even though one is a promo that is at least $5 more valuable. Anyone have any ideas?

'Now' that there are 'overpowered' green and white creatures?

First, there have been very good green and white creatures at 5 forever. One of the original best creatures in the game was Serra Angel.

Second 'Overpowered' is a normie term. Anyone who understands game design to any basic degree would understand that power is always relative. For instance, Lightning Bolt is an insane card in formats where 90% of relevant creatures have 3 or fewer toughness, but it's barely playable in formats where a lot of relevant creatures have 4 or more toughness. 1 mana removal without downside vs 1 mana possibly removal. Bolt, as well as Push, are better in efficient formats.

Elder Gargaroth is good as long as it lives long enough to get an attack in, in which case it goes off the walls with value -- but in different formats, its use will be different. It likely won't see Legacy, Vintage or EDH play in any competitive degree -- it's too slow for a mediocre effect there, or in EDH it's a tiny creature that does a little bit(seriously, EDH players look at this and think Elvish Visionary grew up). But in Standard and Pioneer, it's a win condition. In Modern, it's even weirder -- it's an 'oops I win' against Burn. It will take the place of Thragtusk there. It will be a better Kitchen Finks for ramp inclined decks.

Also, it's a great deterrent from attacking. All it has to do is survive until your opponent's next 'declare blockers' step, and then, as long as they have at least one creature worth attacking with, it's gotten you at least a tiny bit of value. Of course, your opponent gets an extra draw to find removal -- but most decks aren't running removal that kills this, at least in Pioneer. Standard has to run that quality of removal and Modern is currently defined by Labe, t3f, uro and Path.

You dont need yorion as your companion rather than make it as one of the 60.

Spark double is awesome in this deck. There are new etb effects in core 2021 that you might consider adding such as Barrin, Tolarian Archmage, Elvish Visionary, etc. check it out.

Maybe drop Elvish Visionary for Destiny Spinner as it fits the same cmc slot. Although it doesn't provide a card draw, it provides great utility. I agree with SynergyBuild with the other 2 drops.