This spell costs less to cast for each instant and sorcery card in your graveyard. 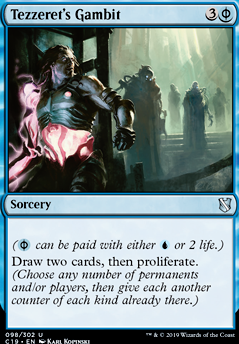 Taigum, manning and planning
by DrMaple

Rather than Demonic Tutor, I would be running Vampiric Tutor and Mystical Tutor. It's better to trade the card advantage for mana and instant-speed in a deck that cares about the top of the library, and since the tutor targets are big-CMC spells, Mystical Tutor is almost strictly better than black tutors.

Also, Discovery / Dispersal and Price of Fame both have synergistic crossover between artificially high CMC, top-deck manipulation, and filling the graveyard for Delve. The Magic Mirror, Winged Words, and Drag to the Underworld seem worth considering in this deck, too.