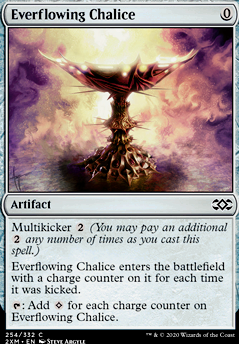 Everflowing Chalice enters the battlefield with a charge counter on it for each time it was kicked.

: Gain for each charge counter on Everflowing Chalice.

krrik [Clive Barker would have approved]
by leviathan707 I'd also recommend swapping out Nyx Lotus and Gilded Lotus for different rocks. It costs 4 mana to cast AND comes in tapped AND you aren't even guaranteed to get value out of it. It all depends on whether or not you're having a good game. You could play this turn 4, not get to use it til turn 5 since it's tapped, AND still maybe only get 1 or 2 mana out of it. Oh, and because of its high cost it's going to be a juicy target for removal. If it gets blown up you basically just skipped a turn. Gilded Lotus is similarly a large target for removal, it's slow, and if it gets destroyed it isn't quite like skipping a turn since you get 3 out of it immediately, but it's still a setback. Everflowing Chalice and Fellwar Stone would each be pretty nice replacements.

I like your deck! Big crab is gonna be fun to see in action. Hope this helps. :^)

deviousx don't forget to take a look at the budget list as well if you're in need of some more ideas.

chrome mox is ok, but it can be tough to deal with the imprint, especially in a 3 color deck. black is probably the best default. i always feel bad exiling a card to play it though and don't think the effect is that critical here.

I would think you could replace Mox Diamond with a Dimir Signet and be totally fine. it's a little slower, but ramp is ramp. even Everflowing Chalice or Mind Stone would be suitable as they're also low cost rocks.

There's always Exquisite Blood + Sanguine Bond if you ever decide to break budget.

As your deck stands though I'd say it's pretty nice. Aristocrats is by no means my specialty but you seem to have all your bits and pieces in order. :^)

I would recommend swapping out Charcoal Diamond and Nyx Lotus for different mana rocks. Charcoal Diamond is less than ideal because it just comes in tapped. Nyx Lotus on the other hand has a different set of problems in my eyes. It costs 4 mana to cast AND comes in tapped AND you aren't even guaranteed to get value out of it. It all depends on whether or not you're having a good game. You could play this turn 4, not get to use it til turn 5 since it's tapped, AND still maybe only get 1 or 2 mana out of it. Oh, and because of its high cost and potential it's going to be a juicy target for removal. If it gets blown up you basically just skipped a turn. I'd swap this out for another 2cmc rock of your choosing. Since you're looking to keep this budget I'd recommend Fellwar Stone and Everflowing Chalice as your replacements. Arcane Signet is definitely a good choice from your maybeboard if you're willing to drop $6-7 on a rock. Prismatic Lens would also work but you wouldn't get the full use out of it since you don't really need to mana fix but it's an option nonetheless.