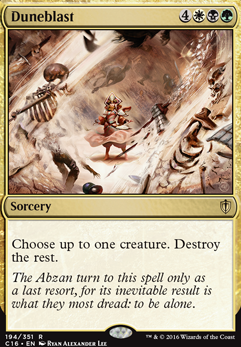 Choose up to one creature. Destroy the rest.

Duneblast occurrence in decks from the last year

I would suggest Norn's Annex and maybe Ensnaring Bridge . You might also reconsider your decision not to attack with a Atraxa. If you put in Guildmages' Forum and Opal Palace , you can cast Atraxa with a counter(s) on her and proliferate them. Swinging with a big lifelink creature every turn gives you health to fuel a Necropotence too. Duneblast and Divine Reckoning would give you boardwipes that leave Atraxa in play.

this is the best wrath effect for these commanders i have found Duneblast .a lil spendy, but.....

ZendikariWol: Well you have some points. But apart from muldrotha who I'm still play testing, Rashmi that I just enjoy playing because of the card draw and cheat minigame and Gisa who indeed is very situationable, the rest has a solid function in this deck.

And for in the two years where I have intensively played this deck I think I know how to run it and what works or not.

Ajani is not really there for the +1, but it's -1 has erased me opponents before though.

Umbra's are amazing by the totem armor itself, my playgroups play allot of fieldwipes and this enables me to either have one creature with allot of counters, or having them think twice about wiping.

Gift of Immortality brings me a death trigger, enter the battlefield effect and it "untaps" afterwards. It's far better than e.g. Indestructibility could be and a valuable asset.

I think you should reconsider your value in Gyre Sage and Selvala also. For one the sage never has her counters to tap by evolve alone. And in magic, never play your hand empty as well. But that's why we add card draw to also replenish.

Deathbringer Regent is just my way of playing Wrath of God. It's just a Duneblast in a 5/5 flying body. It's exactly what I want: one surviving creature in heated times.

And predator Ooze has never wronged me. It's that sitting object on the table no one can easily rid off. People think their fine until ajani gives it double strike and flying.

But I'll take a look to your decks, maybe I'll see something of interest.

Forced Adaptation or Hardened Scales maybe? I know they're mono-colored and add less counters to Ramos, but they have the added benefit of giving him more counters over time. I think a lot of the 2-color guild charms could be dropped for other spells with more colors that also help out what your deck does more. The clan ascendancy enchantments such as Temur Ascendancy would be a lot more beneficial than, say, Azorius Charm.

I also think the deck could use a few boardwipes. Some cards that would work well with Ramos' ability would be Child of Alara or Duneblast.

Arcbound Wanderer would also be a good card for this deck. When it dies, you can move its +1/+1 counters to Ramos and reuse them to make more mana.