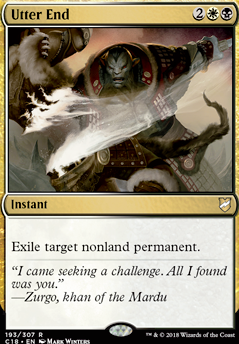 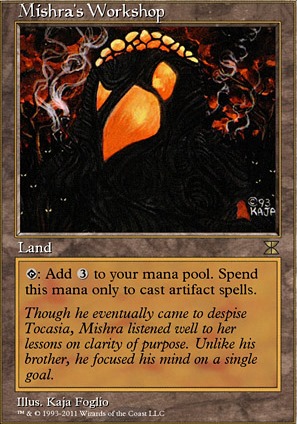 DragonSliver9001, SynergyBuild, I have no problems with those two cards, because WotC has said that colorless cards can do anything that colored cards can do, but they need to be much more expensive than their colored equivalents (compare Scour from Existence to either Vindicate or Utter End).

Mirror Entity is a must as a manasink and Utter End might be an option as premium removal, although it's a bit pricey.

Also, a Bludgeon Brawl can turn all the manarocks into equipment

bushido_man96, I already have Utter End, Anguished Unmaking, and Assassin's Trophy, so how many other spells with low costs are there that can unconditionally destroy any type of permanent? Also, if a player has no cards in hand, Recoil has the same effect as destroying a permanent.

Out: Expedition Map
In: Arcane Signet
It was a big mistake from my side to count Expedition Map as ramp. Because it doesn't ramp you in most cases.
It just tutors a land to your hand. If you got one from the Urborg, Tomb of Yawgmoth or Cabal Coffers combo already and use Expedition Map to get the other one, it's probably going to ramp you.
But in any other cases, it's just mana fixing and helps to make sure, you hit your land drops.
That's why I want to replace it with Arcane Signet, since that card actually ramps you and is nuts in most edh decks.

Out: Cathars' Crusade
In: Vito, Thorn of the Dusk Rose
This one kinda hurts. I really like Cathars' Crusade, since it buffs your whole board whenever you play a vampire by 2.
The problem is, it is an 5 mana enchantment which doesn't do anything when it hits the board, it has 0 impact by itself.
I try to cut down such cards, therefor it has to go for now, but I will put it into the Maybeboard.
Vito, Thorn of the Dusk Rose is a totally new card. He doesn't cost much mana and has the potential to deal quite some damage on top of what I'm already doing anyway.
He also can go infinite with Exquisite Blood, which I already ran before. I want to test him out.

Out: Vandalblast
In: Vona, Butcher of Magan
Vandalblast is one of the best cards in red to me, because it can do so much. But there isn't a ton of artifact decks in my current meta.
And even if I need to wipe artifacts, I still got some options with Merciless Eviction and Austere Command.
Vona, Butcher of Magan on the other hand can repeatable destroy nonland permanents, as long as I have enough life.
She can also gain me life. And she is a vampire. Removal on sticks are pretty damn good for Edgar Markov

Out: Utter End
In: Despark
Not much to add here. Want to test out if Despark is better then Utter End.
There are some cards which I won't be able to remove and I'll be sad, like for example Blood Artist.
But the reduced cost of 2 mana is just insane. Especially in this deck, you don't want to keep 4 mana up to be able to cast Utter End.
However you should be able to have 2 for Despark.