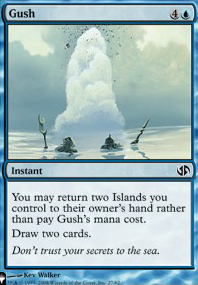 You may return two Islands you control to their owner's hand rather than pay Gush's mana cost.

Wishes on the Wind: Inniaz EDH

You should consider Archetype of Imagination to combo with Magus of the Moat. And Island Sanctuary. I also like Kumena's Awakening for card draw, and you will hit City's Blessing pretty quickly. Gush is good card draw.

jaymc1130, you mention some good options. However, I must disagree with you on a few things. The land count is perfectly suited for the deck given the low curve and I am very able to win in the first three turns. The three mana tutors have never been an issue for me since I can play them on turn two very easily, they have proven to me to be more than good enough. I've also found things like Night's Whisper to work great and actually got the idea for it from another competitive decklist. I do like your ideas however on Notion Thief, Ashiok, Dream Render and replacing Gush. I'll see what I can change!

So, the first thing to consider about Consult Oracle lines of play in strictly Dimir lists is does the commander offer a significantly better reason to play them over the default Dimir option in Yuriko. In the case of Dralnu the answer is actually yes. While Yuriko is liable to be the better over all performer against the meta at large, Dralnu offers the opportunity to play a more control/stax oriented role effectively in a way that Yuriko struggles with and be potentially more effective in longer grindier affairs.

At first glance, some of the things that strike me as potential card slots that could be put to a better purpose are the sorcery speed draw effects like Night's Whisper and Shimmer of Possibility. 2 mana for card selection generally isn't where a competitive list wants to be as it becomes difficult to keep up mana to also interact or threaten interaction in a color set up that lacks access to green ramp sources for the most consistent mana resource build up. This is likely to be a bit less than as ideal as a pilot would want in a large sample size of games. The 3 mana tutors are also a bit out of place in a competitive list as they tend not to be effective enough in competitive settings.

The second thing that jumps out at me is the land count in a deck that again lacks access to quality green ramp play patterns. Most competitive decks have moved to land counts of 29 and 30 as baseline since the days of the "games end on turn 3 or 4" meta state (which in itself was never really true in the most competitive settings) are long past and it's important for a deck to make land drops consistently in games that will commonly be going 5-10 turns in the most competitive settings as players jockey for position in "mexican standoff" game states to set up a game winning turn. In general, competitive decks are going to want to run about 46 total mana sources as a rule of thumb, with about 15 or 16 of those sources coming from various ramping methods like dorks, rocks, and enchantments (rocks being the only real option in Dimir colors, and 16 a count that can't realistically be reached with quality rocks).

3 important cards to consider given what's already in this list would be Counterbalance, Mystic Forge, and any artifact cost reducer such as Helm of Awakening as these cards offer additional control elements and an additional combo line that allows the player to draw out the deck for the win (either by looping a win condition and adding loop enabling pieces in place of less live win conditions like Aetherflux Reservoir, or by playing the primary win conditions in Oracle and Jace Maniac).

With both Twister and Windfall also in this list it would be of great benefit to enable wheel win lines with the inclusion of Notion Thief and Narset, Parter of Veils as these cards are extremely strong performing stax pieces that are universally effective (every deck in the format needs to draw more cards) in addition to comboing with wheel lines of play to establish massive advantages that consistently lead to winning game states.

Toxic Deluge is an effective sweeper piece that should be considered in place of, or in addition to, Damnation.

Ashiok, Dream Render is an incredibly potent card in the competitive meta these days that warrants inclusion in any deck in Dimir colors. It's a universal hate piece along two different angles of attack: preventing tutoring of the deck for opponents, and exiling graveyards stocked with critical pieces.

Scroll Rack becomes a powerful tool with the inclusion of Counterbalance and these two should often be considered together as part of a Counterbalance Package to cement the control/lockdown game plan in games where this line of play is the one drawn in the early stages.

Gush without Doomsday is generally a slot that could also be better served by a different card.

At first glance, these are the things that kind of jump out at me and some of them may not be options for you based on budget or playgroup decisions. But it's a list that looks mostly very solid from a competitive standpoint and with a couple of tweaks something that could be strong enough to keep up with Kess Consult, Urza Tyrant, or Gitrog Dredge in the third tier of competitive decks where there are is a large number of archetypes that consistently best the meta at large and hold their own against tier 3, 2, and 1 decks.

Gattison: what I ended up doing was swapping 2x Deep Analysis and 2x Tormod's Crypt for the 4x Gush.

It worked pretty well! Had a few games where the Relic allowed me to turbo mill 19-20 cards, many of which were part of my opponent's win condition, and then end the turn by blowing up their graveyard. I think Crypt might be better than Relic of Progenitus because it keeps our graveyard intact for reshuffling and/or flashback mechanics.

Agreed on the Deep Analysis - 4 seems too many but I think I'd rather draw two cards on 4 than play a naked Petitioner or, nothing.

really like this idea! Gattison have you thought about swapping the 4x Gush for 4x Relic of Progenitus to add graveyard hate?