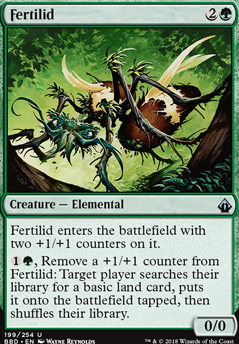 Fertilid enters the battlefield with two +1/+1 counters on it.

, Remove a +1/+1 counter from Fertilid: Target player searches their library for a basic land card, puts it onto the battlefield tapped, then that player shuffles their library.

Fertilid occurrence in decks from the last year 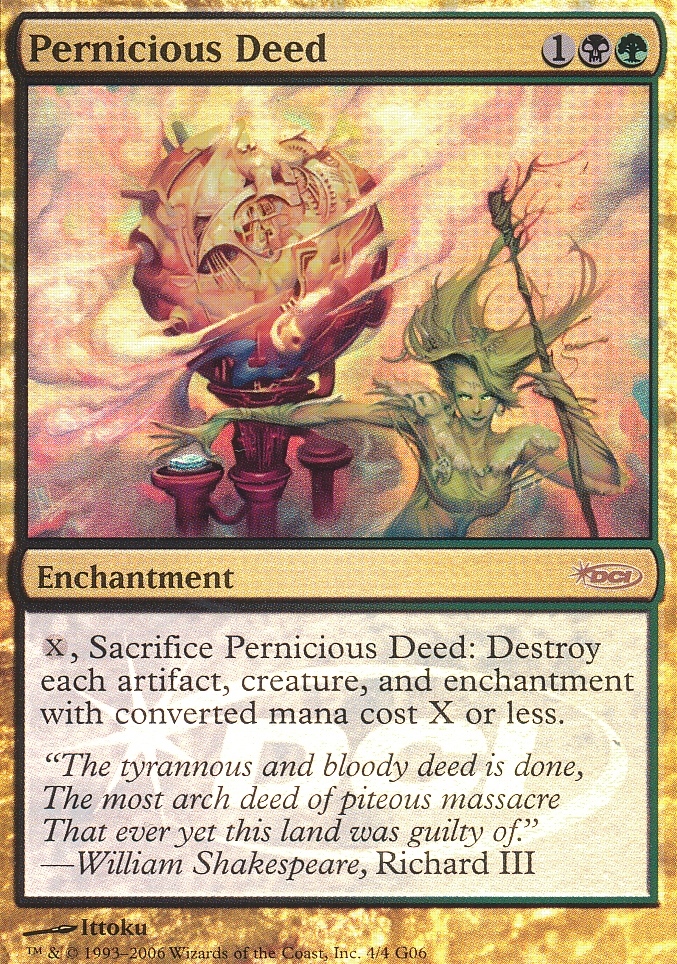 A Girl and Her Hyena
by VexenX

Xyris, SNAKES ON WHEELS
by zman1420

Heh, after reading the description about Ikoria I feel like someone just watched Avatar and simulataneously finished play StarCraft HotS and decided to make a set about it.

Here are some quick thoughts on spoilers so far:

Whaaaaaaat? Nethroi is absolutely busted as a Commander. Has WotC not yet learned that 0 is a number? Also, how does this work with creatures variable P/T? I think they still have a P/T regardless of which zone they are in, but if it's zero....then here comes Lhurgoyf tribal!

As far as the Lutri ban goes, it is correct. It's criteria is automatically met by having a commander deck. You start the game with an extra card in hand which is a solid advantage. There is literally no reason not to run the card in any deck that has the proper colors. It's ability is quite strong.

The Kaiju alternate arts are absolutely fantastic, but the normal alternate arts don't really fit the set's themes. I would've liked to see the cave painting style on the mythos cards used instead.

Speaking of which, the mythos cycle is looking quite strong.

I am glad to see cycling come back and mutate looks like a pretty fun mechanic. I also like the idea of keyword counters. It is very flavorful to the set and allows even bad creatures to suddenly become quite menacing.

Everquill Phoenix is a miss in that it would've been the perfect Phoenix tribal commander (good card otherwise).

Anyone else notice that they slipped Fertilid into the set? I wonder if we will see a saproling theme.

Of the 5 precon-flagship commanders, only Kalamax and Gavi look interesting too me (2 out of 5 isn't bad) which probably means that I'll end up building a deck around one of the other 3 :p.

seshiro_of_the_orochi if partners are really coming back, that is fantastic! Also, the cats are mostly within the Mardu color pie this time (at least according to the article describing the plane).

irish_trunks I know its a little short in manabase, but as many times as I have played this deck the way it is, I have only ever had 2-3 games where mana was an issue, and I've had other decks with a better mana base do a lot worse. The repeatable effect on Fertilid is fairly effective, and has great synergy thanks to all my +1/+1 effects, not to mention being able to token double him. In a previous build I also had a combo with Bloodwater Entity, Harrow, and Into the Roil and had 24 of the 32 lands (at the time) on the battlefield at start of turn 6, which was only possible because Riku lets you use harrow's effect twice without having to sacrifice two lands since the land sac is an additional casting cost. It plays the way i want it to for me, but im glad you liked it.

Fertilid out, Wood Elves in?

Myr Battlesphere out, Deadeye Navigator in (unless youâre opposed to going infinite, but if you donât run too many tutors itâs just good value.)

Cards like Soulherder, Pride Sovereign, and Galepowder Mage might be too slow/conditional to be effective. Pride sovereign is just a beater, which you may find lacklustre over time. Blade of Selves is a little expensive but I think itâs ridiculous in flicker builds.

One last thing to think about. You may not have enough mana to operate smoothly. You may want to consider adding 2-4 more lands, and possibly a couple more mana rocks to consistently be able to cast your spells. It depends on how your etb ramp works out though.

Hi alphonsy. Thank you! For both the compliments and suggestions.

I was thinking green + white + black with a splash of red + blue. Maybe I am not achieving that properly.

And I refuse to use Green ramp. It goes against my morality. Jokes. But I want this to be focused around creature ramp and I guess also signets. Maybe I'll use a Fertilid or cards as such to help the ramp and fixing. Ideas?

Yeah, I have to work on the mana fixing. I just don't know how to do it.

Ok, trash the colorless. I'll abuse the signets. Should I use the banners from Khans or stick to the signets solely? Same or the lands. I was planning to go for 35 or 36 lands, I am missing the basic ones here. But I was wondering if I should use some dual lands. No shock lands or fetch lands, maybe the cycling lands or slow fetch lands.

Thank you for all the help. This is my first 5-Colored deck. This is brand new territory for me. I stick to 2 and 3 colors but decided to take the jump.

Nullmage Advocate, Pulsemage Advocate, and Spurnmage Advocate are some useful abilities on a body. I don't play my hug deck to mill, but I'll usually activate my Folio of Fancies once just to get cards in graveyards so my advocates are online.