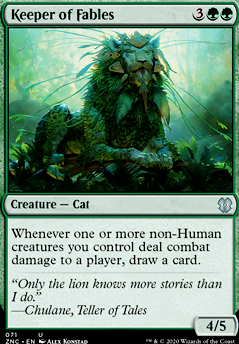 Whenever one or more non-Human creatures you control deals combat damage to a player, draw a card.

Rin and Seri, Adorable
by FlyingFreak26

Garruk's Uprising might be a good fit to add some draw. You might consider Keeper of Fables as a budget option, since you have lots of tramplers you are likely to get through. Ohran Frostfang is a nightmare in a deck with lots of trample, as a trampler with death strike only needs to deal 1 damage to a creature to kill it, meaning lots of penetration and lots of card draw.

End-Raze Forerunners is a very budget finisher, but it can be good enough to clear out 1 dangerous opponent in a multiplayer game while giving all your alpha-strikers vigilance.

Cubwarden is interesting. Keeper of Fables can help you draw cards- Felidar Cub for enchantment removal. Huntmaster Liger as an anthem.

Not super competitive, but flavorful.