Hideaway (This creature enters the battlefield tapped. When it does, look at the top four cards of your library, exile one face down, then put the rest on the bottom of your library.)

When Watcher for Tomorrow leaves the battlefield, put the exiled card into its owner's hand.

*Azami- Your A Wizard
by Denny-Mage 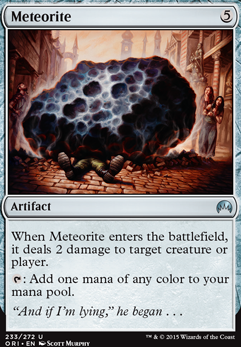 Naban, Dean of Wizards
by Wicker

I get the basic utility of using Familiar's Ruse to return Watcher for Tomorrow to your hand (counter target spell, bounce your creature with ETB ability, put exiled card into your hand), but I'm unsure of the specifics.

Do you get the exiled card put into your hand before you counter the spell? What if somebody counters your Ruse, ie play Veil of Summer in response? If the exiled card was another counterspell, could I cast it in response to their Veil, or has it not entered my hand yet?

I'm not sure about this gameplay, I'd appreciate some help. Thanks so much for your time!

Xica on Please help with a budget ...

Your maindeck severly lacks both interaction & ways to close out the game.

I mean that you only have threats that win slowly, and your interactions is very limited, and doesn't stop the opponent from exectuing their gameplan (4x path is not enough, and Remand goes pretty badly alongside Spell Queller , as it does very little to protect it).

In general you want Growth Spiral in your deck if you want to "skip your third turn" in the sense that you want to have 4 lands on turn 3 WHILE holding up mana for interaction.
The deck plays a single 4+ cmc card - this i would dare to say that its just 4 card in the 75 to do very little - its wasted space.
(The best example of when to play this card is sultai wilderness teachings control - which wants to hold up counterspells on t2, then have man for Cryptic Command or Wilderness Reclamation )

Using Eladamri's Call to get a creature basically means you paid an extra GW to get said creature. I would dare to go as far as to say the card is close to useless if your deck is not built to abuse the interaction of given specific card. Your is not - as all of your cards (in theory) should create extra value together unlike with something like the vizier druid combo which is looking for those exact cards. Nor do you play silver bullet cards that hose strategies so bad that you auto win once said cards resolve.

In theory you should have some way to win the game in your deck.
If you build a flicker deck, then there are plenty of card that do this far better than what you have (and speed matter, as there are decks like tron where you must shut the door on them, unless you are some draw-go control list), so some example cards:
Blade Splicer
Wall of Resurgence
And imho its a sin to leave out some of the best card draw and selection engines this archetype can offer:
Mulldrifter <- for 3 mana and ephemerate you draw 4 cards and get a flying body
Watcher for Tomorrow
(and playing some sort of mass flicker to survive board wipes - aka hate cards against creatures - might be a good idea Eerie Interlude & Ghostly Flicker do this fine)

It looks like Watcher for Tomorrow will trigger twice on the Hideaway. I dunno, I could see this as being a good alternative to Sage's Row Savant . The big downside is that the card doesn't go straight into my hand, though I do get to fish through four cards, which is pretty powerful.

Hey, definitely not a blue player, but the new Watcher for Tomorrow seems pretty good. It does fit in both as a cheap wizard but more importantly as a pretty good card draw engine :) Does anyone have an idea if the ability works with your Commander?