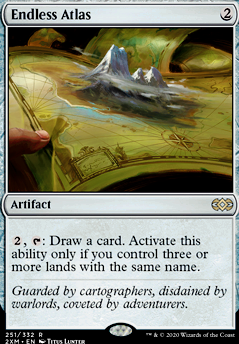 , : Draw a card. Activate this ability only if you you control three or more lands with the same name.

Endless Atlas - Almost as good as tome of legends

Hedron Archive - Ramp when you need it, card draw when you dont

Humble Defector - Politics, not needed but nice to have, especially in more casual builds

I got a lot of ideas for cuts, lmk if you're interested

Darien, it hurts so good!

You marked two Daxos for the deck. If you do have an open slot then maybe Endless Atlas could be put in for some extra card draw.

Fiery Emancipation > Other damage doubler. Costs more but non symmetrical and does a lot more damage.

Myriad Landscape - While a bit slow, ramp is needed in red, worth considering

Blast Zone - Interaction on enchantments and others

Confusion in the Ranks - Triggers on itself so it is enchantment removal, with norin you get a creature each turn, really fun with Dockside Extortionist

Curse of Opulence - Ramp and politics. Attack them with Norin, then Norin runs away and comes back with treasure :D

Ignite the Future/Light Up the Stage - "Draw" which you can use until your next turn, really good with Top as you can look at your top 3 or more importantly, use top to draw a card and then you know you can cast top easily.

Chandra, Torch of Defiance - Ramp, draw, removal and a wincon all in 1

Lmk what you think of each suggestion and if you want ideas for cuts :)

Deflecting Swat - WAY too much utility and for free? Sign me up!

You're lacking some card draw there, you can't always rely on your commander. Endless Atlas, Mind's Eye, Skullclamp, even Solemn the sad robot is potentially worth an inclusion as it helps mitigate your weaknesses of lack of ramp and card draw

Command Beacon - For when your commander is too expensive

Blast Zone - Gets rid of enchantments that you can't interact with

I understand limiting your nonbasics is a priority given your 4 mana doublers, should you wish, you can remove myriad landscape, but personally, I think myriad is a great card and is not a target for LD. If they destroy your Myriad, then thats LD thats not gonna target your cavern of souls or any other relevant utility land.