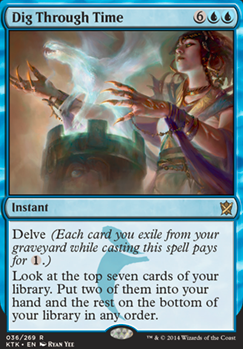 Dig Through Time occurrence in decks from the last year

I'm planning on using a combo with Tree of Perdition! This way I can also use another combo, but I need cards with drawing power. I replaced Dig Through Time with Treasure Cruise. I need damage dealing creatures too. Mana cheap damage dealing creatures. Should I keep 4x Opt? It's only a draw one scry one... If there are better cards for drawing power, let me know. Tome Scour on myself might get rid of a card I need, but I'm going to need a lot of cards in my graveyard for the efficaciousness of Treasure Cruise.

TheAnnihilator on Have: Uro, Titan of Nature's ...

You can trade your Uro to whomever you like! Trust me, there will be no hard feelings from me or rockleemyhero, whom I have traded with several times myself. The T/O system lists completed trades in our binders, and both Rocklee and myself are seasoned traders.

Should you decide to trade the Uro to me, I should say that my Bolts are actually the Fire and Ice foils. Sadly, I canât offer you a Jin Gitaxis. I do have a full play set of both Devoted Druid and Vizier of Remedies. The value shakes up like this:

So you still need to find $7.64, using TCG Market pricing. Again, if you prefer to trade with RockLee, I am more than happy to see a sweet trade occur with my friend. :)

Edit: Also, if youâre worried about your email, if you make a binder and put your address in, no email will be necessary. No one except trade partners can see your address. Either me or RockLee can initiate a trade completely contained within T/O.