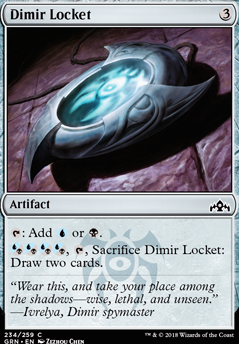 Dimir Locket occurrence in decks from the last year

Together Through Time
by Rathole

I'd maybe go for some lockets (even more card draw + mana ramp).

If you are choosing to play Skilled Animator , I would play some one drop artifact spells. That way on turn three you can play the animator and swing with a 5/5. I would drop the Dimir Locket and add something like Fountain of Renewal or something close to that. Also I would drop Thought Collapse all together. A creature that might help you out and is pretty cheap $ is Traxos, Scourge of Kroog

Currently you have no reason to need white mana in the side so trading some BW duels for basics should be better. Running Field of Ruin / Blast Zone could add utility to your mana base that gets ramped up to 11 with the ability of Karn, the Great Creator to fetch Crucible of Worlds from the side. Your game plan seems pretty grindy so Mox Amber might be better off as a Dimir Locket / Gleaming Barrier just because only 7 cards enable it to make mana making it a Darksteel Relic most of the time.

1) Replaced Wurmcoil Engine with Impervious Greatwurm as I believe it to be a better reanimation target.

2) Replaced Golgari Signet & Dimir Signet by Golgari Locket & Dimir Locket as I believe they are better.

3) Replaced Cancel with Thought Collapse as it fit the deck theme better.