Landfall â Whenever a land enters the battlefield under your control, you may create a 4/4 green Beast creature token.

Rampaging Baloths occurrence in decks from the last year

RAMPAGING BALOTHS AND A BAND OF BEASTY BOY BUDDYS
by Quatrero26 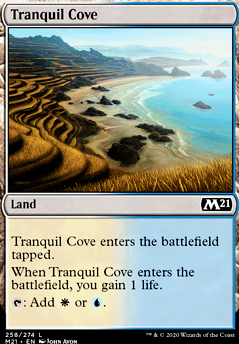 Lord of the Land
by mrmayhem2

The_Big_Elf What makes the deck work is not only a large number of combos, but also having lots of cards that synergize with Yarok, the Desecrated. Rampaging Baloths and Yarok make double beast tokens. Ravenous Chupacabra and yarok lets me kill 2 creatures. Mulldrifter and yarok lets me draw 4 cards. Even without synergy, those cards have objective power and can stand alone in case Yarok is debilitated, giving me more options during games.

Blue Sun's Zenith and Laboratory Maniac are good win cons, but they are only effective as win cons. Without the infinite mana engines, they don't synergize with yarok and are either mediocre/dead cards in hand.

The bounce land combo is difficult to justify because bounce lands are meant to "ramp" you early game. Double their effects with Yarok sets you very far back mana wise and is only beneficial if I have a landfall card. Perhaps its something to put in another deck as any deck with Blue and Green can play the combo regardless of other synergies.

Cuts: Rampaging Baloths, it is a good stuff card, but not a lot of synergy with your deck.

Mazirek, Kraul Death Priest, you don't seem to have the go wide strategy that makes this card worth the slot.

Grave Betrayal, since you are sacrificing the creatures you steal I don't think this will work the way you want it to work.

DeinoStinkus on What is your favorite card â¦

Eight creatures see low for a playset of Garruk's Harbinger, although it does also hit your Walkers. Replacing Overgrowth with some dorks(Birds of Paradise) could fix this. Izoni, Thousand-Eyed feels weak without cards to fill the yard. Cutting her for Murderous Rider, which can be hit by Harbinger, or Rampaging Baloths, which fulfills a similar role and is better with Growing Ranks.