If you tap a permanent for mana, it produces three times as much of that mana instead. 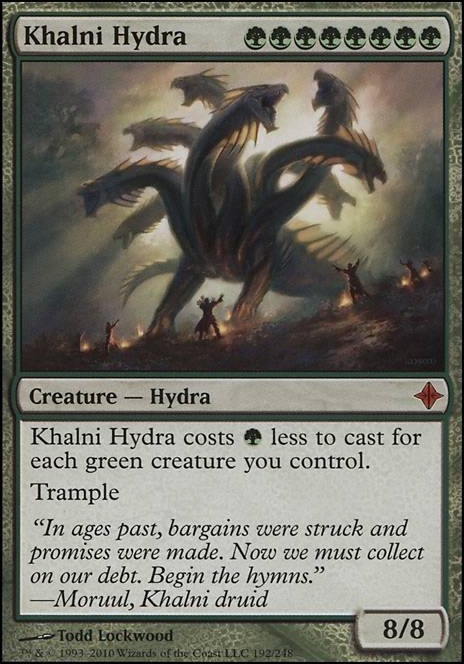 Omnath, Locus of the Elementals
by The_Tribal_Guy

This is a great deck! I've always wanted to build around Golos, and this seems like the best way to satisfy my inner Timmy. Anyways, here are a couple of suggestions:

Omniscience: The perfect card for Golos, this makes all the big cards stuck in your hand free and easy to cast.

Brainstorm: It's a simple card, but it offers some topdeck manipulation, and with fetchlands, which you're running, it's a broken card, essentially being a draw three for 1 mana.

Nyxbloom Ancient: What a card. each of your lands and mana rocks taps for three times as much. This'll help you dump your hand every turn with ease.

And now, for some cuts:

Ramunap Excavator: A good card with fetchlands, but not worth the slot.

Myojin of Life's Web: It only gets a divinity counter when cast from your hand. which isn't often.

Force of Will: As iconic as it is, in this deck, only a quarter of the cards you're running are blue, so Force of will is just a 5-mana Cancel.

Hope these suggestions help, and as always, happy Tapping!

Selvala and her fellowship of Elves

I know that Henge is good, but so is all our stuff! Same reasoning works for Priest: it's good, but is it better than anything else? Would you fetch for it when you coul get a better effect casting Natural Order for Nyxbloom Ancient? Like I always say: 99 cards are too few!

I agree but also disagree with the central point that this is probably just never going to be as strong as RakSac (which for the record I should say that your one actually supplanted my previous standard Arena RakSac) but I think that is why I love looking at these alternate, non-meta decks so much. They require so much more thought and care both in the crafting and playing because you're already going against the grain. And I also completely understand the feeling of not wanting to abandon the theme to chase better cards.

Though have you ever thought of Nyxbloom Ancient? Given its also an Elemental it triggers Risen Reef but also 3-times the mana is a bit nuts. I've had a few mess-around elemental decks where I was getting 40+ mana/Land via a bunch of multiplicative effects. He's expensive both in terms of mana and $$ so maybe he would take too long to get out and he's going to very vulnerable to removal. I'm going to play around with it. One thing I like about this deck is that it is so heavy on the $$ cards. That is why Arena is so much fun - you can play with these tournament-level decks and just decide on a whim to get rid of it as long as you have the wildcards.

DeinoStinkus yeah that's probably a good call for the swap. I haven't picked up a Kalonian Hydra yet. The thought process behind the Journey to Eternity Â Flip was to get back one of the value creatures that will be targeted like Selvala, Heart of the Wilds, Gargos, Vicious Watcher or Nyxbloom Ancient. It also provides a small amount of protection on Zaxara, the Exemplary and can double up a Sakura-Tribe Elder if needed. That said it definitely is a bit slow and restricted with a good chunk of the deck.

If you would gain life, you gain three times as much life instead.

Another tripler in the horrendous cycle of triplers. We have Firey Emancipation and Nyxbloom Ancient, so do a black or blue one.

The Calamity Comes For All

You have some pretty great creatures in your deck!

A couple of suggestions to help ensure you are able to get those onto the board would be ramping: Rampant Growth, Cultivate, Skyshroud Claim, Explosive Vegetation, Nature's Lore, etc.