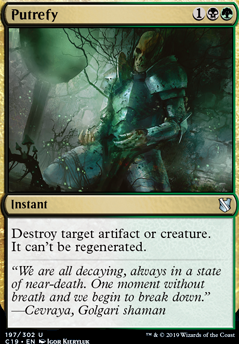 Destroy target artifact or creature. It can't be regenerated.

Putrefy occurrence in decks from the last year

Cast Down , Doom Blade , and Putrefy are all good, super-cheap removal. Necrotic Wound is especially good for a graveyard deck. You might get some other ideas from my $5 Graveyard Shenanigans, although it's not focused on +1/+1 counters.

In a two colour deck with green, I'd say that Rampant Growth is generally better than Arcane Signet , just because lands tend to be safer than artifacts when it comes to being removed.

You do look a little light on card draw. All I can see is Skullclamp so perhaps look at some sacrifice and death trigger card draw effects such as Vampiric Rites and Moldervine Reclamation .

Also, you've got some single target removal in Putrefy and Abrupt Decay but I'd add some board wipes to deal with when the board itself gets out of hand.