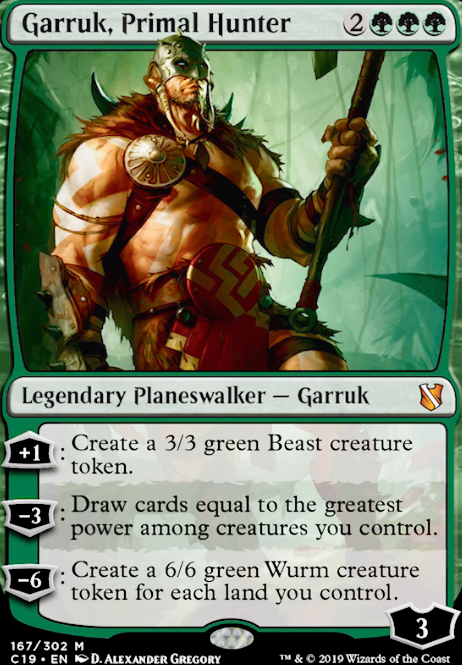 -3: Draw cards equal to the greatest power among creatures you control.

-6: Create a 6/6 green Wurm creature token for each land you control.

Garruk, Primal Hunter occurrence in decks from the last year

Marwyn the Nurturer
by falgabird

These are the cards that are coming to mind for me.

This deck runs very efficiently, and very rarely find myself out of steam. However this is a different build than the token one you are suggesting

In the token build i would suggest cards like Camaraderie, Shamanic Revelation,Garruk, Primal Hunter for card advantage

Grow from the Ashes+Harrow+Rampant Growth I think you'll be surprised with the lands coming in untapped from the first two. Momentous Fall + Return of the Wildspeaker + Garruk, Primal Hunter These three card draw spells draw you at least 8 cards with Gargos alone. Zendikar Resurgent Expensive to bring out, but worth the extra card draws for every creature. Dragon Throne of Tarkir Maybe the best finisher ever in big green smacky bois. Repeatable board pumps. If the budget allows, Nyxbloom Ancient Dude, you gotta try this out. The Great Henge its just stupid man.

One more card came to my mind - Chameleon Colossus - it is (technically) cat as well and if you have enough mana, it's nice beater. (I would use Rancor as well. It gives trample to your creature and it goes back to your hand when the creature dies).

Card draw is pain in Selesnya colors, but you may use:

I struggled a lot with card draw for example with this deck - Gruul, but after adding a lot of these spells, it got much better.